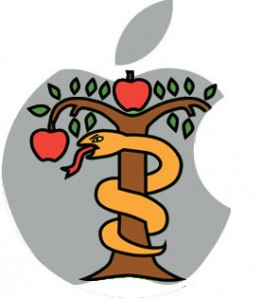 Apple’s iPhone 6 Plus is bigger, but bigger is absolutely no excuse for Specific Absorption Rate (SAR) radiation exposure levels that are only .01 under the FCC’s legal limit of 1.6 watts per kilogram (W/kg).

It’s easy to dismiss Apple’s new iPhone 6 Plus as merely catching up to Android in size, but Apple is still nowhere near catching up with Samsung in regards to phone radiation safety.   The new CEO of Apple, Tim Cook, holds the same position on cell phone radiation as did the late Steve Jobs who remained in denial through to his last breath.

It’s a well-known fact that the genius behind the iPhone, Steve Jobs himself, made it clear he was ” Not Interested” in having an app in the Apple app store which alerted iPhone users of excessive exposure to potentially cancer-causing cell phone radiation.

A pioneering company named Tawkon developed an application to measure the amount of radiation coming from your iPhone.   Jobs wanted no part of it, in a twist of irony, it was cancer that took Steve Jobs from this world; he may have been a genius in many ways, but not in cancer prevention. Click here to read the email exchange between Jobs’ and Tawkon.

Contrary to reality, Apple wants consumers to believe the new iPhone 6 Plus is a device that can improve your health.   The newest iPhones offer a variety of new features including Health Kit software to power fitness apps on what could be Apple’s highest radiation cell phones to date.

According to Joel M. Moskowitz, Ph.D. School of Public Health, University of California, Berkeley, “the minimum separation distance that the iPhone 6 should be kept from the body is approximately two-tenths of an inch (i.e., 5 millimeters)”.  This minimum distance from the iPhone is important because if the iPhone is closer — you may exceed — the FCC’s safe levels of microwave radiation absorption.  Apple has submitted this critical warning to the FCC about the latest iPhone’s (Apple Official Doc 08/06/2014 RF Radiation Warning To FCC For iPhone)

Like most cell phones, both new iPhone 6 models have several transmitters that can simultaneously emit microwave radiation, which includes Cellular, Wi-Fi, and Bluetooth radiation. When all these transmitters are turned on AT THE SAME TIME, the iPhone 6 SAR value is 1.58 W/kg and for the iPhone 6 Plus SAR, it’s 1.59 W/kg.  These levels are very close to the legal limit which is 1.60 W/kg.

To reduce exposure to microwave radiation, you can turn off any transmitters, not in use and when possible use airport mode if carrying your iPhone in your pocket without proper RF Safe radiation shielding between the device and body. RF Safe incorporates microwave shielding into the flip cover of custom fitting iPhone cases that mitigate much of the risk from iPhone radiation.

The Specific Absorption Rate (WITHOUT BLUETOOTH AND WIFI TURNED ON), when measured at the head — both Apple iPhone 6 and iPhone 6 Plus, have a SAR rating of 1.18 W/kg.    The SAR level for an iPhone 6 positioned 5mm from the body is 1.18 W/kg and 1.19 W/kg for the iPhone 6 Plus.

Moskowitz says “To ensure that the cell phone does not exceed the legal limit, consumers should never keep their cell phone in their pockets or next to their skin. The cell phone is not tested directly against the body because most cell phones would fail the SAR test as the radiation absorption increases dramatically when the cell phone is close to the body.”

HOW MUCH HEALTHIER COULD AN APPLE BE?

This dramatic difference in head SAR levels is mainly because the transmitter is located at the bottom of Samsung phones rather than at the top, also they incorporate an innovative antenna that transmits the highest intensities of microwave radiation directionally from the lower back of their smartphones.

Seems rotten of Apple that an iPhone exposes a user to several hundred times more potentially harmful RF radiation.  The most capitalized and most successful technology company in the world can’t compete with Samsung to build a lower radiation iPhone.  They could if they wanted!!

Keep Apple’s Insanely High SAR Levels Out of Your Head! 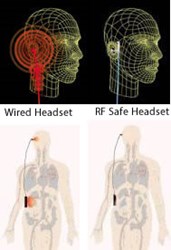 This “Air Tube” headset is absolutely the best quality and SAFEST cell phone headset that you can buy.  The unique aspect of this is that the portion that approaches your head is not wire but acoustical plastic tubing!   This dramatically helps you reduce radiation emissions because it prevents your brain from absorbing the microwave radiation produced by your iPhone.

iPhone Radiation Can Dramatically Increase In A Car

The RF waves will be reflected back at you from the metal chassis, doors and roof magnifying the radiation. Also, the cell phone has a hard time sending its signal out of the car because of the metal chassis, and increases its transmitting strength to compensate as you travel making new connections to different  cell towers.

Limit Unprotected Cell Phone calls to under 2 minutes.
The longer you use your phone, the more you are being exposed to potentially harmful microwave radiation.

Avoid placing cellphone on ear while call is connecting.
When you place a call and you are waiting for the other person to pick up, your cellphone is sending out its strongest signal! Try to not place your cell phone to your head during this phase of the call.