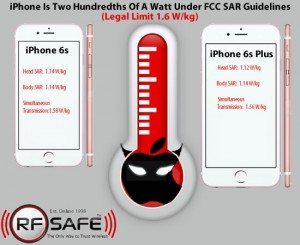 Every time Apple releases a new iPhone, there’s always the question of whether or not the most valued corporation on earth will ever make an effort to lower radiation exposure bombarding iPhone users.  It’s a well known fact Simultaneous Transmission radiation exposure levels from last years iPhone 6 Plus are only .01 under the FCC’s legal limit of 1.6 watts per kilogram (W/kg).

Two hundredths of a Watt is extremely close to the legal limit when all the iPhone 6s transmitters are turned on AT THE SAME TIME.  Your iPhone 6s emits radiation from several transmitters, which include Cellular 2G/3G/ 4G modulated digital frequency bands, Wi-Fi, NFC, Hotspot and Bluetooth that can simultaneously emit RF radiation.  This is referred to as the iPhone 6S’s Simultaneous Transmission SAR rating.

Now keep in-mind this test assumes your iPhone is being held approximately 5mm from your body while operating the device, otherwise you might exceed Federal SAR safety standards.  This is the basis of a recent law that passed last month in Berkeley CA – “The Right-to-Know Ordinance” to inform customers that purchase a cell phone that a minimum safe distance from RF Radiation is required.

The Berkeley law also requires customers are aware that children could be at greater risk as SAR testing does not consider thermal heating effects except for that of a 6 ft 200 pound man – the user body type SAR simulations are design to represent only apply to a VERY small part of world’s population.   To make matters worse non-thermal effects aren’t even in the calculations deriving SAR test results.  This raises great concern for women, unborn babies and children for which current SAR testing does not apply.

iPhone 6s Specific Absorption Rate measured at the head (BLUETOOTH, HOTSPOT AND WIFI TURNED OFF) has an SAR rating of 1.14 W/kg which is a small improvement over last years model, but this is several years behind Samsung who makes most of the worlds lowest SAR smartphones.

Samsung’s owners manual for-instance only informs users of simultaneous head and body ratings for their Galaxy s6 and Note 5 which represents a much more realistic human exposure level than to assume consumers are not using their WiFi and Bluetooth as an everyday part of life.    In other words, in most usage situations where all smartphone functions are enabled – the iPhone 6s head SAR reduction for non-simultaneous SAR ratings are basically irrelevant for most consumers using new generation iPhones.

Thankfully, Apple’s own iPhone store suggests older iPhone 6 cases will still fit the Phone 6S.  If you take a look at one of Apple’s iPhone 6s leather cases, you’ll find a little note: The case fits snugly and your iPhone 6s or iPhone 6 still feels incredibly slim, even with the case on.

Which is all to say that despite the chunkier iPhone 6s, old cases should work (tighter hard plastic cases could have problems). So don’t rush out and spend a bunch of money on a specific 6s/6s Plus case unless you want to.

Apple’s iPhone 6/6 Plus cases will fit the new iPhone 6s/6s Plus models! But how safe is your current iPhone case for protection from potentially deadly microwave radiation?

Here’s a fact not many people are aware of — many very popular iPhone cases have been proven to increase SAR levels by up to 70% — So by choosing the wrong iPhone 6S case you could easily cause your smartphone to exceed SAR guidelines enforced by the FCC.

None of the three cases contain metallic parts, which has a well known affect on SAR levels, but all these popular smartphone cases increased the user’s radiation exposure.   The effect on radiation exposure would likely vary with each of the hundreds of cases on the market, and each would have to be tested individually to come up with an exact measure.   The results in above Table , however, are believed to reflect the range an iPhone increases it’s radiation levels when using an everyday phone case without proper RF radiation mitigation capabilities.

A primary design objective of all phone cases should always be to insure there is absolutely no increase in RF output power or human absorption levels of microwaves after the phone case is installed.

While many products on the market claim to protect you from cell phone radiation, the big difference between RF Safe cases and other phone cases on the market is you can easily test them yourself.

RF Safe’s smart case supports all your smartphone’s features, including fold out kickstand for viewing media without holding your iPhone.

Designed to deflect radiation from Smartphones

RF Safe’s flip cover cases only incorporate shielding mechanisms which utilize deflection. Absorption (attenuation) is never used to prevent affecting the phones software regulating RF power out-put.  RF Safe only uses absorption technologies on wires (Ferrite Beads), such as on an air-tube headset that is plugged into your cell phone.

Flip cover case radiation shields deflect phone radiation as shown in the illustration.  By simply keeping the shielded flip cover between your body and device, no matter if used to your ear, or carried in your pocket – you have the shielding you need covering the entire front of the phone to deflect potentially harmful radiation – and still hear callers perfectly clear!