FCC GUIDELINES  “SAR LEVELS” ARE HELPING TO PERPETUATE THE BIGGEST SCAMS OF ALL TIME!

But, there is absolutely NO evidence that reducing SAR levels will reduce health hazards!  More alarming is the most recent news to be buried online proves just the opposite.  This means that much lower intensities at high frequencies promote faster tumor growth.

This isn’t ‘Pseudoscience’, this is the latest research out from just two weeks ago, published, replicated and peer reviewed research that clearly shows that by lowering SAR Levels to below acceptable FCC guidelines DOES NOT keep your family safe from body-worn or hand-held devices that emit wireless radiation.  RFR hazards are now very evident at below thermal levels!

This latest research further supports why over the last 17 years, RF Safe has strongly been against this awful red herring fallacy being used as a safety standard by the FCC to regulate wireless devices that transmit wireless radiation in close proximity to a persons body.

This includes all wireless devices, and the newest wearable computers too.  For instance after New York Times writer, Nick Bilton, published this weeks most proactive, yet provocative headline “Could Wearable Computers Be as Harmful as Cigarettes?“.  The pro-wireless industry “profits before people columnist”, attacked the NYT writer’s quoted source and most quack-pot naysayers relied heavily on wearable computers being less a risk because they emit lower radiation levels within the FCC safety guidelines.

It’s presumable that all this recent controversy was started by the wireless industry to bury the real news. News on research that proves in all reality comparing wireless radiation to smoking has substantial creditability.

YES, REAL SCIENCE SUGGEST WEARABLE COMPUTERS COULD BE AS HARMFUL AS CIGARETTES!

As it turns out, the newest peer reviewed study, available online March 6 2015, published in The Journal Of Biochemical and Biophysical Research Communications, titled “Tumor promotion by exposure to radiofrequency electromagnetic fields below exposure limits for humans” , (Study Excerpt) is a replication of an earlier experiment, also from Germany, that found weaker cell phone radiation signals can promote a much faster growth of tumors in mice.

This replicated research ProVES that wireless radiation levels DO NOT have to cause cellular heating (thermal vs non-thermal radiation) to show causation of cancer.  The latest peer reviewed study used SARs of 0.04 W/Kg which falls far below current safety standards in every country in the entire world and equates closer to cell phone tower exposure than direct high intensity microwave radiation exposure from a Smartphone handset or wearable wireless device.

The USA’s maximum SAR is 1.60 W/Kg, and now keep in mind that these studies were done with SAR levels at 0.04 W/Kg.  The lowest SAR phones on the market still emit thousands of time more radiation than in these control studies and one of the most popular smartphone’s in the world today, the iPhone 6 Plus has a Simultaneous Usage Rating SAR of 1.59 – that’s only .01 under the legal limit.

“NO” SAR (Specific Absorption Rate) RATING Can Be Called Safe!
To Do So Is Bad Science, Bad Judgment & Recklessly Endangering Lives!

“Complicating matters even further, lower doses were often found to be more effective tumor promoters than higher levels; in effect, turning the conventional concept of a linear dose-response on its head.” – Alex Lerchl

Microwave News point out that the lead author of this study, Alex Lerchl, has been very skeptical of any science showing low level RF effects, but has since changed his stance. “Once accused of being an industry lackey Lerchl is now being hailed as a hero”.  He’s being hail a hero, because people like Jimmy Gonzalez only spent 30 minutes a day on cell phones rated as safe under today’s outdated SAR standards.  We highly recommend you watch this video.

“Lerchl has shown that mice exposed in the womb with a known cancer agent, ENU, and then exposed to a UMTS cell phone signal had significantly higher rates of tumors of the liver and the lung, as well as of lymphoma than with ENU alone.”

In 2010 Thomas Tillman did a study, the predecessor of Lerchl’s own study, and the results found that 3G radiation promotes tumors. The study was regarded as significant, but largely forgotten about and ignored. Lerchl’s study which included a larger testing group offers us an insight into the technology we mistakenly regard as safe.

“Lerchl found higher rates of cancer among mice exposed to SARs of 0.04 W/Kg, 0.4 W/Kg and 2 W/Kg —and in some cases, the lower the dose, the more cancer. For instance, he saw a higher incidence of lymphoma at the two lower doses than at 2 W/Kg, as shown in the histogram taken from his paper, which has been accepted for publication in Biochemical and Biophysical Research Communications: Lerchl Lymhoma. 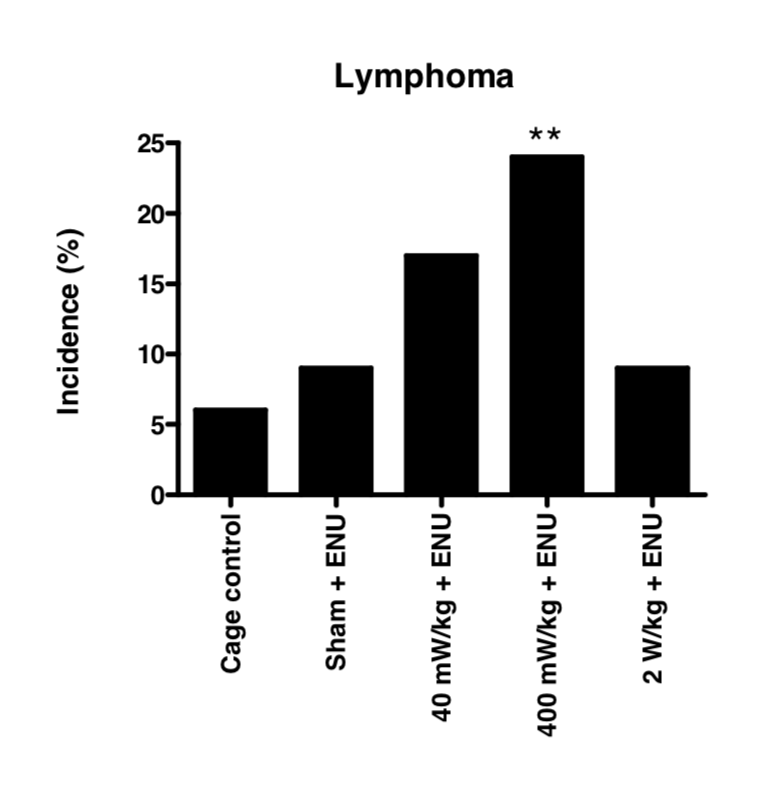 Image from Lerchl’s BBRC paper, Figure 1; “**” indicates that the result is significant at p<0.01.

“Our results show that electromagnetic fields obviously enhance the growth of tumors,” says Lerchl in a press release issued by Jacobs University in Bremen, where he is a professor of biology.

For years Lerchl was at the forefront of the big industry propaganda machine saying that RF radiation did not cause cancer, or have any ill health effects. Now, Lerchl’s study has become one of the biggest problems for the telecom industry.  A once skeptic and denouncer of RF hazards, Lerchl has catapulted the notion that we only have “limited evidence” right to the forefront of science.  We, most undoubtedly now, have evidence that even small doses of radiation can cause harm – and this doesn’t exclude wearable computers.

This study, along with many others that are coming, or those that have already shown dangers relating to RF exposure, will help change the industry sooner than later.   At the moment the current standards of safety in the cellular communications industry are unacceptable and borderline criminal. The consumer and their children should not be used as guinea pigs the same way big tobacco used American citizens.

The lack of true humanitarianism by big tobacco should not be the standards by which we allow the wireless industry to follow. We the people will not stand for anything less than the absolute truth and we will continue to fight for REAL safety regulations and the safest wireless technology that protects humanity from excessive RF exposure.