The FCC request for comments on a review of cellphone radiation regulations generated more than 950 submissions — most calling for stronger safety regulation.  Many cite research that finds the 18 yr old guidelines outdated, not applicable to woman and children, and more importantly dangerous to humans at under current acceptable FCC exposure levels.   Current SAR testing does not address concerns over non-thermal hazards.

Doctors and scientists have voiced their professional safety concerns in response to the Federal Communications Commission’s (FCC) request for input regarding its SAR radio-frequency radiation regulations adopted in 1996.

More than 950 individuals and organizations submitted thousands of testimonials, research papers and scientific publications. Almost all of these submissions supported the need for stronger cell phone radiation regulations.

The four declarations were signed by 98 scientists from 23 nations between 2002 and 2014.  A complete list of the scientists who have signed these petitions can be found on Moskowitz’s Electromagnetic Radiation Safety web site in“Part III: Why We Need Stronger Cell Phone Radiation Regulations–98 Scientific Experts Who Signed Resolutions”.

In Part I of 3, Moskowitz contains links to the four expert resolutions and a list of key submissions to the FCC that reflect the industry position as well as the experts’ testimony “Part I: Why We Need Stronger Cell Phone Radiation Regulations–Key Testimony Submitted to the FCC”.

Part II contains links to published research papers, monographs and reports on wireless radiation and health that can be downloaded from the FCC’s website “Part II: Why We Need Stronger Cell Phone Radiation Regulations–Key Research Papers Submitted to the FCC”.

In addition to these four resolutions, numerous individual experts submitted written testimony to the FCC calling for stronger regulation of cellphone radiation.

With the exception of submissions from wireless industry corporations and associations, virtually all of the submissions to the FCC including those from various government agencies demand that the Federal government strengthen cell phone regulations to protect public health in the 21st century.

Current regulatory standards only protect us from thermal or heating risks; yet, many hundreds of laboratory studies have found that low-intensity, non-thermal exposure to cell phone radiation can promote carcinogenic mechanisms. Moreover, research on humans has found that 25 years of mobile phone use is associated with a three-fold risk of brain cancer.  – Aug. 4, 2014 – Joel M. Moskowitz, Ph.D. School of Public Health. University of California, Berkeley

The World Health Organization has classified cell phone radiation as “possibly carcinogenic” to humans, and the European Environmental Agency and fifteen nations have issued precautionary health warnings about cell phone radiation and recommendations on how to reduce risks. Nonetheless, the wireless industry in the U.S. has vigorously opposed precautionary health warnings. Furthermore, the wireless industry has lobbied to weaken the Federal cell phone radiation standards to correspond to those established by the International Commission on Non-Ionizing Radiation Protection (ICNIRP), a self-appointed, non-profit organization consisting of 13 voting members.

A publicly-available archive of all documents submitted to the FCC can be found at http://apps.fcc.gov/ecfs/comment_search/execute?proceedin….

Head of UC Berkeley’s Center for Family and Community Health, Joel Moskowitz has been studying the cell phone radiation safety issue since 2009, and has concluded that cell phones are “one of the top emerging public health risks.”  The evidence is very compelling. “It’s just a matter of time,” he said.

Joel M. Moskowitz, Ph.D. is a strong supporter behind the city of Berkeley, California being the first in the USA to require cell phone radiation warning labels on all cellphones sold with-in the city limits.

The telecommunications industry is opposed to placing cellphone radiation warning labels on cell phone packaging, saying that the courts have already ruled in its favor when San Francisco tried to get a similar ordnance passed two years ago.

Several other states, including California, Hawaii, Oregon, and Pennsylvania, have tried to adopt cell phone warning label laws but have been blocked by intense lobbying by the cell phone industry.  The industry does not want consumers to read the microwave radiation safety warnings that cell phone manufacturers bury in cell phone user manuals, nor does it want cell phone users to take simple precautions to reduce their risk of harm.

The industry has argued before the federal Ninth Circuit Court of Appeals that consumers will panic if they are informed about the risks from exposure to cell phone radiation that have been reported in the scientific literature.

Berkeley city council members say they don’t want to debate the science, they just want information to be more visible to consumers.

Harvard Law Professor Lawrence Lessig publicly announced during a lecture at the University of Southern Maine that he would help defend such laws if the wireless industry sued.    Professor Lessig calls us the 30 percent concerned about the dangers of cellphones, especially to infants and children through their teens.  He makes the case that laws will be written to warn consumers about dangers of cellphone radiation and Berkeley might be first to succeed with his help.

Many claim no one reads the fine print buried in a cellphone user’s manual to “Avoid direct contact with body; hold the cell phone 5/8 of an inch away from the head.”  No one questions the damaging effects of radio-frequency radiation on human cells, despite many scientific studies supporting that position and despite a rising body count: increasing incidence of brain cancer on the side of the head where the cellphone is habitually held.

In this AUDIO of Max Anderson, the Berkeley City Councilman says, “Cell phones are a risk, and I believe the public has a right to information that’s credible, readable and understandable about the device they’re using”.  Anderson, who co-sponsored the ordinance and has a background in public health and has made it clear he wasn’t going to back down from the CTIA .  “I’m not intimidated by the cell phone industry. The legal department might be, but I’m not.” he says

As long as the proposed ordinance passes a debate scheduled for September 9th, Berkeley, CA could be the first U.S. city to require such cell phone health warnings that inform consumers of potential risk from RF radiation exposure.

Radiation from cell phones penetrates the skull and gets absorbed into the brain tissue, having an adverse affect on brain cells. Studies also show cell phone radiation can also affect sperm count among men who carry phones in their pockets.

Consumers should utilize an air tube headset as a safer alternative to wired headsets or in-ear Bluetooth headsets, use the speaker feature and keep phones away from your body unless there is RF radiation shielding between the wireless device and cell phone users body.  When carrying a phone on your body it’s highly recommended to use either an RF Safe flip cover radiation shielded phone case or pocket shield to deflect excessive radiation away. 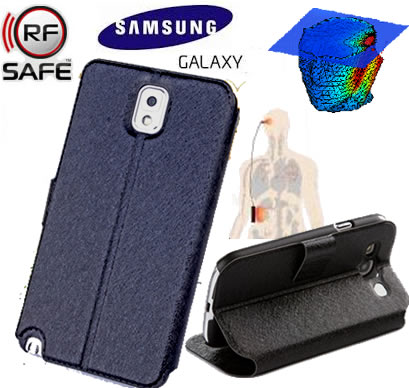