President Barack Obama put a “Wolf in sheep’s clothing” when he appointed the former chief lobbyist for the wireless industry to chairman of the Federal Communications Commission (FCC), which regulates the safety of wireless devices.

UPDATE: Video shows a growing dissonance among communities about the government’s lack of action to protect the American people from wireless radiation, this was seen in January 2014 when activist confronted FCC chairman Tom Wheeler in Silicon Valley.  The full video can be seen at RF Safe here https://www.rfsafe.com/fcc-chairman-tom-wheeler-confronted-cell-phone-radiation-silicon-valley/

This is yet another astonishing conflict-of-interest in the choice of appointed Federal Regulators, who better resemble wolves guarding the sheep, rather than advocates for the health of the public at-large.

Tom Wheeler, head of the CTIA from 1992-2004, has been appointed to Chairman of the Federal Communications Commission (FCC).  This is no different then having a tobacco CEO appointed as Surgeon General of the United States.

Tom Wheeler made his living defending the wireless industry from allegations of health hazards even when the scientific data showed a link between cell phone radiation and cancer.

RCR Wireless News, an industry publication, alleges that Mr. Wheeler suppressed and biased the research from the nation’s largest mobile phone health research project while he served as head of the CTIA, the wireless telecommunications industry association. 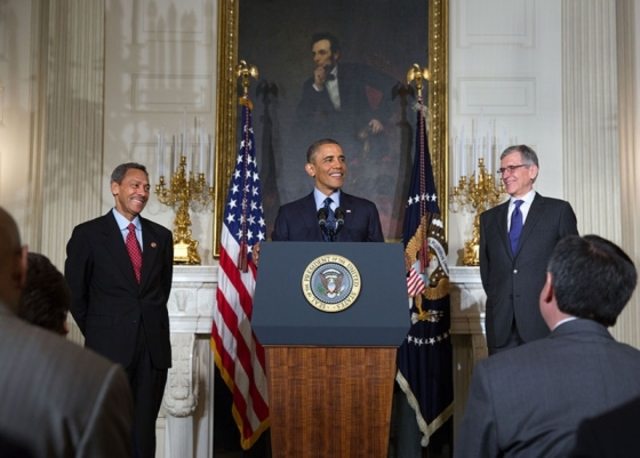 Wolf in sheep’s clothing, Tom Wheeler (on right), 67, a wireless venture capital investor , former chief lobbyist for the wireless industry CTIA and former Obama campaign fund-raiser, was sworn in on Monday as chairman of the Federal Communications Commission.

Wireless Technology Research L.L.C. was a 6-year, $28 million research program funded by mobile phone carriers and manufacturers from 1993 to 1999.

The strategies used by the CTIA are similar to those employed by the Tobacco Industry for many decades to downplay the dangers of cigarette smoking. After six years of litigation by the Department of Justice, a Federal court finally found the Tobacco Industry guilty of fraud and racketeering in 2006.

How long will it take before the curtain is pulled back on the Wireless Industry’s longstanding strategy to co-opt the scientific community, and suppress and bias the research on the health effects of cell phone and wireless radiation?

Over 17 months the FCC received more than 900 submissions regarding its cell phone radiation regulations. These documents reveal what we know about wireless radiation health effects, and why we need to strengthen regulations and provide precautionary warnings to the public.

In response to the Federal Communications Commission’s (FCC) request for input regarding its radiofrequency radiation regulations adopted in 1996, individuals and organizations submitted thousands of documents, testimonials, research papers and scientific publications that are now available to the media and to the public.

These documents reveal what we know about wireless radiation health effects, and why we need to strengthen regulations and provide precautionary warnings to the public.

Although fifteen countries have issued precautionary health warnings about cell phone radiation and recommendations on how to reduce risks, the wireless industry in the U.S. has opposed precautionary warnings and wants to weaken our radiation standards instead of strengthen them.

In all, there were 904 submissions to the FCC between June 24, 2012 and November 18, 2013. Many submissions included multiple documents. To access these papers go to the FCC’s web site for Proceeding Number 13-84: http://apps.fcc.gov/ecfs/comment_search/execute?proceeding=13-84

Although there is a crude search engine on the FCC web site, one cannot use it to search the documents that were submitted. Thus, to help investigative journalists, researchers, and activists, I have created a table of contents for this valuable archive about cell phone radiation and its health effects, and cell phone testing procedures and regulatory standards.

The table organizes the submissions by constituency: (1) professionals, health scientists and engineers; (2) consumer, environmental and health organizations; (3) municipalities; (4) wireless industry corporations and organizations; and (5) miscellaneous other. The listings contain direct links to the documents.

Not indexed below are submissions from the many individuals who did not provide an affiliation. These individuals uploaded numerous scientific publications which enable the general public to access these papers from the FCC’s web site.

On the safety of cell phone radiation (3)

Attachment.3. Letter of Inquiry from U.S. Senator McCain to the U.S. Surgeon Gen (5)

Attachment.6.Resolutions passed by City of Tucson and Pima COunty, Arizona.2013 (6)