Don’t trust your health to products you can’t test yourself!   Be RF Safe to be sure! Anyone telling you that SAR levels are designed to protect your children when using a cell phone has LIED to you! Large investment bankers have backed Pong with 10’s of millions of dollars http://www.crunchbase.com/organization/pong-research-corporation
http://www.sec.gov/Archives/edgar/data/1540249/000140508614000207/xslFormDX01/primary_doc.xml 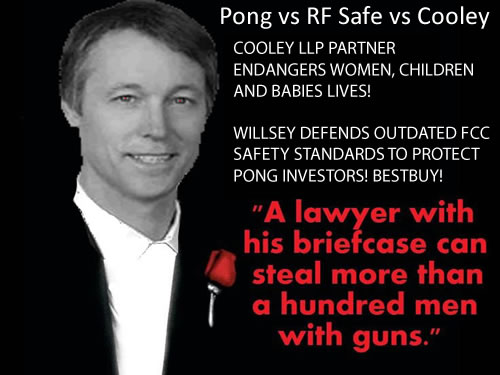 Of which Pong has hired some big guns to stop the world from knowing the truth about the testing used by pong cell phone radiation shields. Peter Willsey, Partner of Cooley LLP has quickly launched a legal assault against RF Safe and RF Safe’s founder, John Coates’ freedom of speech — to inform the public of real testing results using a US patented method for testing radiation shielding products that cost under 10 dollars to build yourself in 5 minutes.

People will need to understand 2 years after Cooley, LLP’s Partner began his promising law career –University of Richmond School of Law , JD, 1993, McNeill Honor Society – The Founder of RF Safe, John Coates held his daughter while she gasped for her last breath. Not long after that microwave radiation exposure was officially attributed to this birth defect by a peer reviewed study in 1997, I founded RF Safe Corporation in my Automotive Fabrication and Repair shop in 1998 just outside the city limits of Aspen CO. The RF Safe was founded in 1998, and online in 1999 and has remained a MISSION in my life ever since.

[pullquote]Mr.Willsey take note of a true Attorney for the people,  Jimmy Gonzalez — a real life Attorney who lost his life battling three different cell phone induced cancers on November 27, 2014 –RIP Jimmy — The Cell Phone He Used That Killed Him Was Rated Using Outdated FCC SAR Standards[/pullquote] Not a day goes by that I can’t remember the feeling that went through my body as my daughters spirit ascended to Heaven. I knew that instant my life had just changed forever, and I’ve gone broke more than once spending every penny I’ve had to build and supply ONLY THE BEST accessories that make cell phones safer in the hopes that no parent has to watch their child die from such a horrific birth defect.   Now as of today, the same 1997 study has been replicated many more times, confirming my worst fears – and this fear does not come from radiation that can be measured using SAR levels. SAR levels simulate heating body tissue, I can assure you Mr. Willsey heating measured by SAR was not the cause of the birth defect that killed my child, it was exposure to levels of microwave radiation far below SAR thresholds.

That said, I don’t know what you will be capable of in a court battle when comparing my legal resources to yours, however, just be assured Mr. Willsey you’ll need to convince a jury into a capital punishment verdict for me to ever stop trying to save lives, and at the top of my list is protecting unborn babies and exposing Pong for using deceptive testing methods that the FCC recently received over 933 submissions of which most all called for much stricter safety regulations, and different testing measures for cell phones altogether.

The SAR testing method used by Pong is 17 yrs old and was NEVER designed for protecting children or unborn babies. Under my test, the pong case does nothing to reduce the risk to unborn babies or children for that matter. It is not my fault Pong didn’t spend more of the millions they raised on researching the hazards of microwave radiation instead of fancy marketing and lawyer’s that attack anyone that speaks poorly of Pongs Product.

It’s not just the Founder of RF Safe that says the testing standards Pong Case uses endangers the lives of women and children! Here is what the American Academy of Pediatrics, a professional organization representing 60,000 physicians, said in a letter to the FCC and the FDA urging the FCC to adopt radiation standards that (http://bit.ly/17tQclg):

“Protect children’s health and well-being … Current FCC standards do not account for the unique vulnerability and use patterns specific to pregnant women and children. It is essential that any new standard for cell phones or other wireless devices be based on protecting the youngest and most vulnerable populations to ensure they are safeguarded throughout their lifetimes.”

There are very few people on the planet with my expert level experience in the field of personal RF/EMF safety. Guess we’re getting ready to see how honest the American justice system is when presented with lifesaving facts over Cooley, LLP’s legal connections and legal jargons.

RF Safe wants everyone to remember the selfless words of the 35th President of the United States, given in a speech only months before being assassinated.

“. . . the number of children and grandchildren with cancer in their bones, with leukemia in their blood, or with poison in their lungs might seem statistically small to some, in comparison with natural health hazards, but this is not a natural health hazard–and it is not a statistical issue. The loss of even one human life, or the malformation of even one baby–who may be born long after we are gone–should be of concern to us all. Our children and grandchildren are not merely statistics toward which we can be indifferent. ”
— President John Kennedy, June, 1963

Here are a few quotes which empower the American belief that EVERY AMERICAN has the right to be informed clearly on health hazards they face in our modern day society!

“If we are to guard against ignorance and remain free, it is the responsibility of every American to be informed.”

“if a nation expects to be ignorant & free, in a state of civilization, it expects what never was & never will be. the functionaries of every government have propensities to command at will the liberty & property of their constituents. there is no safe deposit for these but with the people themselves; nor can they be safe with them without information. where the press is free and every man able to read, all is safe.” – Thomas Jefferson’s exact words.

“The price of freedom is eternal vigilance,” – Thomas Jefferson

“Give me liberty, or give me death!”

I will not give up my freedom to show thousands of videos of cell phones using a Pong still expose people to more radiation than having their face directly against a microwave oven door.  Let the American people decide!

Get ready for America’s favorite 80’s marketing for a product named after an 80’s video game!!

Remember the Pepsi vs Coke Challenge – I’m already setting up for malls and festival’s around the country before your next letter can arrive express mail- Technologies version of this challenge is coming just for you Colley LLP! RF Safe vs Pong – Lots of new videos of everyday people taking the RF Safe vs Pong Challenge. It’s really a lot of fun, and very informative as well.

In fact, Mr. Willsey don’t take any of this too personal, and simply inform your client (Pong Case) to immediately remove all claims related to any health benefits, and most importantly explain to everyone that visits Pong’s website the shortcomings of SAR testing and why the SAR testing your client uses should not be relied on with regards to health effects, and letters must be sent to all BestBuy customers that have purchased this product informing them of the flaws in SAR testing used to market your product as having a health benefit.

I can compromise, as long as my demands are met, I will take down the Don’t get played by pong video and frankly I will say very nice things about Pong as a “possible signal enhancing case”, because better technology does exist for that too.

As long as your client continues to make potential mothers think they are being protected from radiation, your client is putting babies and children in danger which I will not stand for!

I don’t wish Pong harm by exposing the truth about SAR testing used by Pong, I really wish your client would have researched more before giving people a placebo instead of the truth, “that it takes a system of usage along with the correct accessory during the desired usage of a wireless device”. There is no one accessory that can protect you from radiation, this is why for over a decade RF safe has ALWAYS suggested the package of accessories addressing different types of device usage. Carried in pocket, used to head, headset options, shielding handbags and purses.  Much like driving a car, safety must be taught (RF Safety), and the proper equipment implemented.

Don’t worry, I’ll teach everyone at the Cooley law firm a lot about RF Safety as your legal aggression persist or at least until my demands are met ;)

PS. God Bless ALL of our men and women that have died defending the little guys rights (God given inalienable rights), making my freedom of speech as important as any of the billionaire investors backing pong cases.

While I am grateful for all those willing to give everything all to protect life, liberty and the pursuit of happiness.  I have a site libertyunites which pays tribute to over 9700 people (since 9/11) that have lost their lives in this war for equality and Freedom for all! As your firm is in DC I hope you can respect the freedom these people died for so I can speak out against your clients products!