UPDATE 2014: The BabySafe Project, a new public awareness initiative designed to inform women about wireless radiation exposure and pregnancy. If you missed the June 3rd press conference, you can watch the video here.

I am convinced that the Neural Tube Defect (NTD) that took the life of my daughter Angel Leigh Coates in 1995 was attributed to EMF exposure. I founded RFSAFE.com a few years later in 1998 when it became clear not enough was being done to protect our children and educate the public about this invisible killer.  This nightmare of reality was due to my wife’s occupational environment – where Tamara spent most of her day in front of three 5 watt microwave radios.

Two years after the loss of my child, many studies on EMF’s and birth defects started to paint a very clear picture for the need to avoid radiation from industrial equipment and powerful hand held microwave devices like cell phones.

Among many other studies, the team of scientists in CUA’s laboratories exposed about 3000 chicken embryos to EMFs. They found that: Steady, oscillating EMFs increase the rate of neural abnormalities in chicken embryos by a factor of approximately 2.5. (Figure 30) 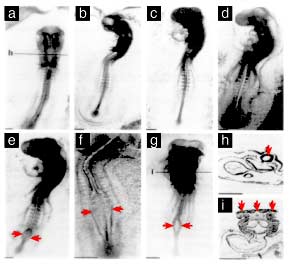 Pictures (a)-(d) show normal, unexposed embryos following a 48 hour incubation. The spinal cord is the “tail” of the embryo, and the neural tube inside this appears completely normal; so does the developing brain. Picture (h) is a transverse section at the level of the hindbrain for embryo (a) as indicated by line (h) in picture (a). This brain is normal.

Pictures (e)-(g) and (i) show neural tube and brain defects induced by electromagnetic fields. In (e)-(g) arrows indicate neural folds of open neural tubes in the spinal cord. This is an abnormality known in humans as spina bifida. The hindbrain shown in (i) of embryo (g) is abnormal – totally flattened – compared to the normal brain shown in (h).

There is a biochemical explanation to this. EMFs significantly change the activity of the important growth enzyme ODC (also related to cancer), making the availability of the enzyme inappropriate at critical stages in the development of the embryos. For example, during neurolation (formation of the neural tube) the activity of the enzyme is too little, causing the incomplete closure of the neural tube on the chicken embryos shown above!

Birth defects are the single leading cause of infant mortality in the United States. Two common defects of the central nervous system contribute substantially to this total. These defects are Spina Bifida and Anencephaly which are defects of neural tube closure or Neural Tube Defects (NTDs).  NTDs are malformations of the developing brain and spinal cord and have an average prevalence rate of NTDs is 1 per 1,000.  They are caused by a failure in the process of neural tube closure. Under normal conditions, the nervous system forms a closed tube after 4 weeks of gestation. But for unknown reasons, sometimes the neural walls do not fuse. This can result in both major or minor birth defects.

This issue of EHM includes two papers that reviewed what is known about the relationship between environmental and occupational exposures and NTDs. In both papers, the authors are clear that the cause of NTDs is unknown but that certain risks factors have been identified including demographic factors like, place of residence, sex, ethnic group and family history, socioeconomic class, diet, and occupational and environmental exposures.

The second study, conducted by researchers from the University of Nijmegen in the Netherlands, identified several occupations where parents appear to have a higher risk of having an offspring with a NTD. These include mothers employed in industry, transport, and communication; and fathers employed as, printers, plastic production workers, those working in the food, beverage, and textile processing industries and those exposed to low-level radiation. Overall, the authors of both studies found evidence that exposure to EMFs are associated with an increased incidence of NTDs.

FDA Said It Will Stop Blocking Imports Of KN95 Mask, But What Spooked China?