iPhone 6 Users Bent, Apple Stock Crushed: In the wake of Apple’s very own Bendghazi style cover-up to hide just how inferior iPhone has become in today’s post Steve Jobs Smartphone world – New test by Consumer Reports give iPhone 6 users something to really get bent over. 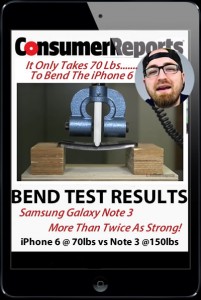 Compression machine tests performed by Consumer Reports has concluded it only takes a butt with 70 pounds of force to distort the shape of an iPhone 6.   In other words, #BendGate is Real — it takes less pressure to destroy an iPhone 6 than it does 4 school pencils, which won’t snap until 80 pounds of force is exerted.

What has not been spoken about is the fact that, “a bent iPhone can cause its microwave transmitter to utilize maximum output power; possibly exceeding safe RF Radiation levels whenever an iPhone’s antenna is either deformed or broken.”

The Apple iPhone 6 deformed at 70 pounds of pressure, with its total destruction occurring at only 100 pounds of force. In comparison, the Samsung Galaxy Note 3 withstood 150 pounds of pressure before any signs of deformation or case separation was observed by consumer reports.

According to RF Safe, “the integrity of iPhone’s structural design is an important factor for ongoing compliance with current regulatory safety guidelines.”   The fact that the iPhone 6 already pushes the legal exposure limits is covered in detail here

The iPhone 6 and 6 Plus both have an SAR of 1.18 watts per kilogram when positioned near a user’s head, but it is nearly three times greater than Galaxy Note 3, which has an SAR of just 0.35 W/kg.

It is also important to understand that when Cellular, Wi-Fi and Bluetooth transmitters are running simultaneously, the iPhone 6 Plus’s SAR jumps to 1.59 W/kg – This is only .01 under the FCC’s legal safe limit of 1.6 W/kg.

With this information, the facts to support the following statement are confirmed!

Samsung Galaxy Note 3 and Note 4 Are Twice as Strong and 300% Safer Than iPhone 6 Plus!

Did Apple lose 7.8 billion today over a sub-par iPhone 6 Plus? Did Apple Investors Get Burned By iPhone Radiation? Forbes reported that recent option chains suggest there is further downside for Apple investors. But according to recent testing, there is much more downside for iPhone users that want to minimize radiation exposure to stay healthy.