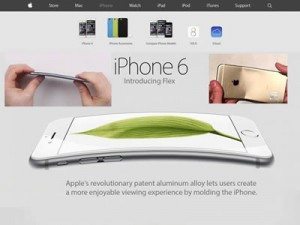 Are news reports that the iPhone 6 is prone to bending actually a plot orchestrated by mainstream media?  That’s what Apple rumors are starting to say about the original video that broke the BendGate story.

Apple’s publicist want you to believe the Smartphone designer is merely the patsy in a wider conspiracy to defame the company.   Judging from the 5% knocked off Apple’s market capitalization on today’s market open; investors are right to be worried that Apple’s image of perfection is unsustainable and coming to an end sooner than later.

However, it doesn’t look like institutional investors have anything to worry about for the time being — because it appears Apple kicked in it’s own quantitative easing that caused the stock to bounce back quickly.  Something you can afford to do when you have a few hundred billion offshore in tax free money.

The company on Thursday told CNBC that “only nine customers” so far have complained about the device being too flimsy and it defended its hardware engineering from criticisms.

“With normal use an iPhone getting bent is extremely rare,” a member of Apple’s media relations team told the Wall Street Journal.  “It now seems that more iPhone 6 Plus units were bent by YouTubers taking advantage of the media kerfuffle than were bent by actual consumers.”

Perhaps most troubling about Apple using a Bend-ghazi style youtube cover-up, is the fact that some iPhone 6 Plus owners are saying their handset bent when placed in a front pocket, a location used by many to protect their smartphone from being sat upon.

As the Internet goes viral with images of the iPhone 6 plus emerging from people’s pockets bent like a used paperclip, it may be useful to consider this: Apple explicitly tells you not to carry your phone in your pocket, due to the microwave radiation exposure hazard it poses. 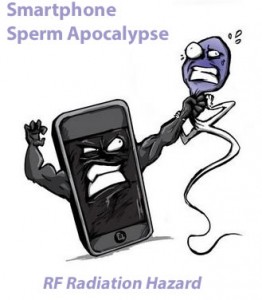 In the little handbook that comes with every iPhone (the one that gets discarded almost immediately because, it’s a cell phone, we all know what to do with those, right?) Apple also explicitly states that the phone is not supposed to touch your body much, if at all.

In fact, in the manual for the iPhone 5, Apple says users should carry their iPhones a full 10 millimeters (or .39 inches) away from their bodies at all times. That means, if the device is in the pocket of your jeans, it’s much too close to be considered radiation safe.

Cell phone radiation, measured in radio-frequency exposure, is regulated in the U.S. by the Federal Communications Commission (FCC). All phones must be tested to ensure that they emit a specific absorption rate of not more than 1.6 watts of radio-frequency energy per kilogram of body tissue, a rule designed to prevent harm from the heat generated by radio-frequency waves.

Both new iPhone 6 models have several transmitters that can simultaneously emit microwave radiation, which include Cellular, Wi-Fi and Bluetooth radiation. When all these transmitters are turned on, the iPhone 6 SAR value is 1.58 W/kg and for the iPhone 6 Plus SAR it’s 1.59 W/kg.  These levels nearly exceed the legal limit which is 1.60 W/kg.

Men who wish to start a family must reconsider how closely they store their iPhone to the family jewels.

Until now, the research on the existence of an smartphone-sperm apocalypse has sent mixed signals. So, a team led by Dr Fiona Mathews, of Biosciences at the University of Exeter, conducted a “meta-study” or study of studies published in the journal Environment International on June 10, 2014 – Which found that cell phone usage was associated with an 8.1 percent descent in sperm motility (how fast the little guys swim) and 10 percent change in sperm viability (if they can make it to the egg alive).

“Given the enormous scale of mobile phone use around the world, the potential role of this environmental exposure needs to be clarified. This study strongly suggests that being exposed to radio-frequency electromagnetic radiation from carrying mobiles in trouser pockets negatively affects sperm quality,” explained University of Exeter’s professor Fiona Mathews.

“This could be particularly important for men already on the borderline of infertility, and further research is required to determine the full clinical implications for the general population.”

In Another Cell Phone Radiation Study

While cell phones are SAR tested against a simulated human head in the “talking” position, they are not tested against the body (or in a pocket) in the “carrying” position. Instead, the tests assume the user is carrying the phone in a holster, away from the body, whenever the phone is broadcasting at full power. And since radio-frequency energy exposure increases sharply the closer the phone gets to your body, some worry that FCC testing is missing a lot of actual exposure.

In addition, the FCC tests do not consider biological effects caused by anything other than the heat generated from radio-frequency energy, like altered protein expression or DNA damage. Experts and organizations like the Environmental Working Group have expressed concern over the testing rules for cell phones, citing studies that show links between cancers and cell phone radiation exposure.

In 2011, a World Health Organization report classified radiation from cell phones as “possibly carcinogenic to humans,” particularly as cell phone use relates to an increased risk for glioma, a malignant type of brain cancer.

Dr. David Carpenter, the director of the Institute for Health and the Environment University at Albany, New York has spent several years reading research on radio-frequency exposure and has testified to Congress on the subject. He says he is very wary of cell phones.

“My personal sense is that the evidence for increases in cancer is quite strong. It’s not one hundred percent, but most studies have shown that [people with] high exposures have elevations in leukemia, brain cancers [and] some other kinds of cancers.”

He predicts that cancer rates will go up in the coming decades.

“Latency for brain cancer is 20 to 30 years. Cell phones haven’t been around for all that long. I think it’s likely that we’ll see an increase in cases over the next years,” Carpenter says.

Busting the myths produced by the wireless industry about lack of evidence on harm caused by cellphone radiation, Finnish scientist Dariusz Leszczynski on last Friday said that long-term exposure to cell phone radiation, on an average of thirty minutes a day over ten years, causes an increased risk of brain cancer.

“The Interphone, Hardell and the recently concluded CERENAT studies in France have all pointed towards a common risk to increased brain cancer,” said Leszczynski, adjunct professor, biochemistry, University of Helsinki. Leszczynski is one of the members of the expert committee constituted by World Health Organization’s International Agency for Research on Cancer (IARC). WHO has classified electromagnetic frequency radiation emitted by cellphone, cell towers and wi-fi as category 2(B) or possibly carcinogenic.