In this short audio clip Biochemist Jerry Phillips explains how he was hired by Motorola to study the effects of the RF Radiation emitted by cell phones. The relationship between himself and his employer was great in the initial stages, but it started to sour as soon as he started submitting the research data to Motorola. The negative results were not to Motorola’s liking, and they started to discuss what spin they could put on it, before progressing to tactics such as telling him what to do, how to write, what to say, and finally how to do the work.

The contract with Motorola became impossible to continue with when they urged him not to publish his findings which exposed the negative effects of cell phone use. Phillips decided to go ahead and publish the work against the wishes of Motorola in 1998, and this upset the revolving door former FDA executives now at Motorola. As Phillips points out, it is virtually impossible for scientists to perform honest and unbiased telecommunications studies, as the only money available for research comes from the telecommunications industry, and they always ensure that the results of the studies conform to their liking. 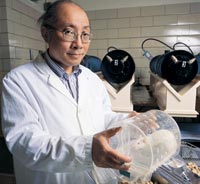 Scientists like Dr Henry Lai at the University of Washington risk having their careers destroyed by publishing studies about the health hazards of cellphones, cellphone towers and Wi-Fi (see http://www.seattlemag.com/article/uw-scientist-henry-lai-makes-waves-cell-phone-industry and http://www.psrast.org/mobileng/mobilstarteng.htm#junk). Lai wasn’t even thinking about cellphones when he published a study in 1995 about DNA and memory damage in rats exposed to EMR from radar equipment – until a whistle blower leaked an internal Motorola memo about their plan to institute “war games” to get him fired and cut of his grant funding. Although the University of Washington president resisted their request to fire Lai, lack of funding has forced the scientist to discontinue his EMR research.

In this leaked Motorola memo in the words of Motorola executives, they claimed to have succeed in “War-Gaming ” the Lai-Singh Experiments proving DNA damage at below so-called safe exposure levels –  the smoking-gun reveals itself as legitimate researchers are constantly countered by wireless industry propagandist.  Numerous  attempts to discredit peer-reviewed research indicating consumer health risk have failed, but often they succeed in confusing the public’s perception of wireless health risk in general.

Former senior White House health adviser and internationally regarded epidemiologist Devra Davis revealed that the cellphone industry is knowingly exposing us to dangerous levels of electromagnetic radiation. No small problem when you consider that of the roughly 7 billion people on this planet, about 6 billion of us now use mobile phones.