Having an application which monitors the radiation emitted from iPhones is something savvy consumers need to have in order to be informed about potentially harmful cell phone radiation. When you ask a salesperson at an Apple Store about the SAR ratings of their iPhones, they look at you like they’ve never heard that question/concern before.

Ironic since Apple likes to see itself as being ‘cutting edge’. Apple is only ‘cutting edge’ when it suits their devilish marketing plans —  a stark reminder of Apple’s first product being sold for 666 dollars.  Apple needs to be ahead of the curve in supporting their customers who are concerned about possible health hazards from using their products.

It’s a well know fact that the genius behind the iPhone, Steve Jobs himself made it clear  he was ” Not Interested” in having an app in the Apple app store which alerted people of over exposure to potentially cancer causing cell phone radiation.

Steve Jobs’ shortcoming understanding cancer, and how to prevent it is obvious with his early demise, also by the way he inadvertently put millions of iPhone users in a position of not having an option of alerting them when maximum safe levels of cancer causing radiation exposure were being reached.

Below is the email exchange between Jobs’ and Tawkon.  They sent a courteous email to Jobs in the hopes of gaining approval for distribution of the application through Apple’s App Store, only to receive a characteristically curt response back: 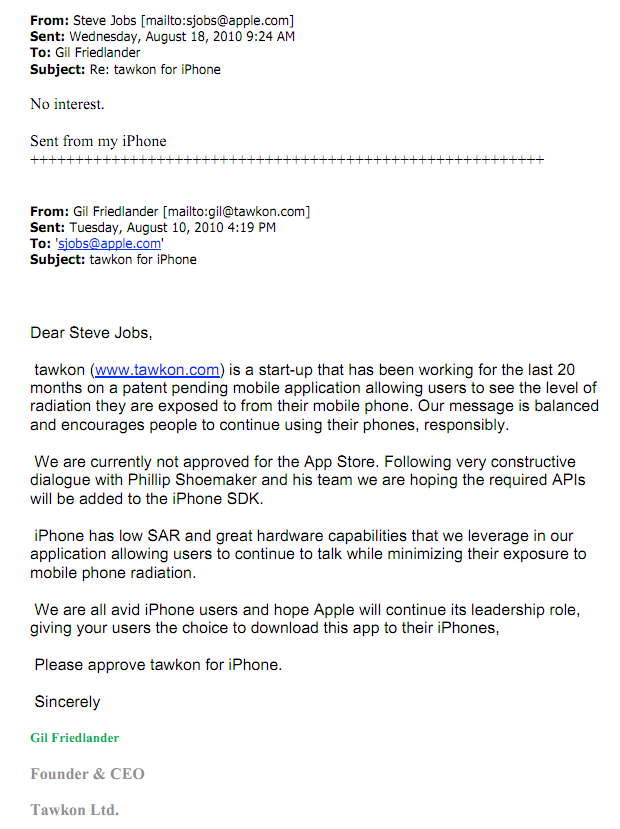 While the reason for the rejection has not been revealed, it is believed to be because Apple is in denial about the credible scientific data backing 1000’s of studies proving the need for iPhone users to have access to the Tawkon App.

According to the developers of the application, the Tawkon iPhone app uses a variety of parameters like distance from cell phone tower, signal strength, weather condition, terrain, antenna proximity from the body, antenna orientation and travel speed to analyze the iPhone’s dynamic SAR (Specific Absorption Rate). It is to be noted that the iPhone app only “predicts” the emitted radiation and may not provide absolute measurements.

However, it can be highly useful to users who may want to ensure that calls from a particular location are safe in terms of radiation levels. For instance, calls that are made from your basement may cause a higher level of radiation to be emitted compared to calls made from your living room and the iPhone app will thus help you in making a judgement on a safer place and time to make calls from your iPhone.

Order the RF Safe Pocket or Purse Shield in PINK, and raise $1 for Beast Cancer Awareness

RF Safe Founder, John Coates says, “Parents worried about their children being exposed to cell phone radiation and want to limit radiation exposure – we suggest using an RF safe air-tube headset to protect the brain and a pocket shield to shield the body”.

RF Safe offers the most complete system for using your wireless phone safely is one easy to use package.

The RF Safe Air-Tube Headset was developed using an air tube to keep potentially harmful radiation away from your head. Where the non-conductive silicone air-tube starts is where the RF radiation drops off creating the distance you need to avoid harmful RF from penetrating directly into your head. 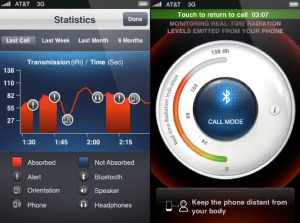 The company named Tawkon developed a fantastic health application to measure the amount of RF radiation coming from your iPhone. According to the company the application was praised by Apple executives for its graphically appealing design, use of non-private APIs, and overall functionality.