In just 20 years cell phones have evolved from an uncommon, expensive, brick-shaped object used in restricted areas of Western countries, to a convenient and ubiquitous part of a modern smartphone world, with 6 billion subscriptions worldwide. The arrival of this mass technology has been accompanied by concerns that radio-frequency (RF) radiation emitted by cell phones might cause cancer, especially brain tumors.

Over the last two decades, the wireless industry has war-gamed scientific data to badly skew the perception of definitive health risks linked to cell phone radiation exposure — including a rare form of deadly brain cancer and DNA damage.

In the USA the wireless industry manipulates health risk perception through tightly wrapped controls over regulatory agencies. There isn’t anyone hiding the revolving door between lobbyist and regulators; its a sad loss of the checks and balances which ensure corporations in America are not endangering people on a conquest for global dominance.

However in countries like India propaganda is much more loose-lipped where the industry’s largest wireless trade group, COAI deploys considerable resources to deceive the public on wireless health issues. The industry has gone as far as hiring Pulitzer Prize winner Siddhartha Mukherjee, an Indian-born American physician and oncologist to make claims that far outreach his expertise.  Mukherjee lost credibility in the eyes of millions by stating that the World Health Organization should remove cell phone radiation from its list of possible human carcinogens.   Cell phone radiation exposure is currently grouped with lead and chloroform in terms of human toxicity. 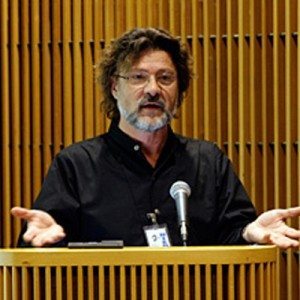 Dr Dariusz Leszczynski, Adjunct Professor, Division of Biochemistry and Biotechnology at the University of Helsinki

Busting the myths produced by the wireless industry about lack of evidence on harm caused by cellphone radiation, Finnish scientist Dariusz Leszczynski on Friday said that long-term exposure to cell phone radiation, on an average of thirty minutes a day over ten years, causes an increased risk of brain cancer.

All major studies link cell phone radiation to increased risk of brain cancer!
“The Interphone, Hardell and the recently concluded CERENAT studies in France have all pointed towards a common risk to increased brain cancer,” said Leszczynski, adjunct professor, biochemistry, University of Helsinki. Leszczynski is one of the members of the expert committee constituted by World Health Organization’s International Agency for Research on Cancer (IARC). WHO has classified electromagnetic frequency radiation emitted by cellphone, cell towers and wi-fi as category 2(B) or possibly carcinogenic.

What are the associated health risks?
Apart from brain cancer, three definitive studies showed that exposure of radiation to the skin and brain caused changes in cell structure. “Changes were induced in skin cells and metabolism of glucose in the brain was affected.” It is also known to cause hearing loss, infertility, and polycystic ovary syndrome (PCOD) in women.

“If these assumptions stand true and cell phone radiation is hazardous and even deadly – we could be facing an epidemic of cancers in 30-40 yr old’s in the near future; the explosive growth in smartphone usage among teens adds up to more RF exposure over their lifetime — much more than the cumulative exposure seen in adults today,” says John Coates, Founder of RF Safe.

With all the doubt surrounding the safety of cell phone radiation, cell phone users need to adopt a precautionary approach to using cell phones as safe as possible.

Don’t wait for the smoke from propaganda to clear, heed expert scientific advice that prevention is better than a cure.  Here are some tips and accessories to keep you and your loved ones safe from any possible complications due to excessive exposure from cell phone radiation.

10 Ways to Reduce Your Wireless Exposure

Keep an RF Safe phone  radiation shield between your body and wireless device!

1. Avoid carrying your cell phone on your body (e.g. in a pocket or bra).

2. Avoid holding any wireless device against your body when in use.

3. Use your cell phone on speaker setting or with an “air tube” headset.

4. Avoid using your wireless device in cars, trains or elevators.

6. Whenever possible, connect to the Internet with wired cables.

7. When using Wi-Fi, connect only to download, then disconnect.

9. Unplug your home Wi-Fi router when not in use (that is, at bedtime).

10. Sleep as far away from wireless utility meters (“smart” meters) as possible.