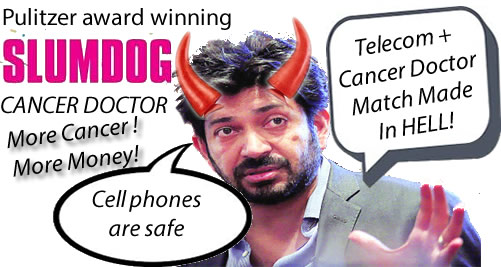 What do you call someone who sows misinformation, abets behavior that endangers public health and extracts enormous visibility for future book sales…  all while being rewarded handsomely by the commercial industrial complex surrounding the wireless industry?

I’m not aware of any common noun for a contemptuous person of this sort. But there’s a proper noun: Dr. Siddhartha Mukerjee.

Read on and learn where to send your copy of ‘The Emperor of all Maladies: A Biography of cancer’  so we can burn this devils books for wanting to burn your children’s brains.

Somehow this cancer doctor, who is also a Pulitzer Prize award winning writer and crony for the wireless industry, either hasn’t spent much time researching causes of cancer over the last ten years, or there is something much more sinister going on.

News of  the Indian telecom industry’s latest sponsored PR stunt, a  lecture by an obviously a pro-cancer doctor.   It was Dr. Siddhartha Mukherjee’s lecture in Delhi, India that rang the same tone as his story in the New York Times back in 2011 ” Do Cellphones Cause Brain Cancer?”

Here is a quote from that story in 2011 before we get into this weeks news where Dr. Siddhartha Mukherjee is calling to have the World Health Organization remove cell phone radiation as a class 2B possible human carcinogen …..

“Nonionizing radiation lies on the other end of the energy spectrum. These rays can warm cells, boil water and stimulate chemical reactions, but they cannot strip electrons away from atoms or damage DNA. They have no capacity to mutate genes directly and thereby no simple and direct means of initiating cancer.” –  Dr. Siddhartha Mukherjee

I have highlighted what is true in green, and what is false in red.

The people reading this sort of  propaganda released by so-called respected writers and doctors need to understand is one simple thing here.  DNA damage occurs from other reasons than just stripping electrons from atoms.

It is critical to point out that this propaganda comes days after a new peer reviewed editorial was published, “Low intensity radio-frequency radiation: a new oxidant for living cells”  which showed 76 of 80 peer reviewed studies have proven that non-ionizing radiation induces imbalances in ROS (Reactive Oxygen Species).

That’s 92% of ALL peer reviewed medical studies on ROS and RF exposure demonstrate a non-thermal mechanism for DNA damage at levels 300 times lower than the lowest radiation cell phones sold on the market today!

THIS ProVES THAT ATOMS DON’T HAVE TO BE STRIPPED FROM ELECTRONS TO DAMAGE DNA!!!

The author of the peer reviewed editorial,  Igor Yakymenko appeared in the scientific journal, “Oxidants and Antioxidants in Medical Science” on March 29th 2014.  The editorial details a collaborated effort involving several other respected scientists –  Evgeniy Sidorik, Diane Henshel, Sergiy Kyrylenko uniting USA, GREECE and UKRAINE in a common consensus on the potential for low level radiation from wireless devices to damage DNA.

The below statement made by Igor Yakymenko from the scientific journal is ALL green, and proves through true scientific analysis, that Dr. Siddhartha Mukerjee is either a terrible person to take medical advice from on cancer or  just a terrible person, maybe both for putting profits before the public’s health.

Low intensity radio-frequency radiation (RFR) emitted by wireless phone devices “could lead to mutagenic effects through expressive oxidative damage of DNA”, because “the substantial overproduction of ROS in living cells under low intensity RFR exposure could cause a broad spectrum of health disorders and diseases, including cancer in humans”. – Igor Yakymenko

WHY A BOOK BURNING?

In protest of scientists and doctors blatantly being dishonest with the public and policy makers about the hazards of excessive microwave radiation exposure for their personal gain over the public’s health by supporting the wireless industry’s propaganda machine.

This weeks ‘The Indian Express’ interview with Dr. Siddhartha Mukherjee titled “No link between mobile phone radiation and cancer“ is propagating wireless industry deception and lies across the internet.

Dariusz Leszczynski, PhD, a well respected member of the 30 person panel that enacted the official global warnings of cell phone radiation being a possible human carcinogen — quickly reacted to this latest wireless industry propaganda by defending the panels decision which ended in a vote of 27 experts out of 30 voting for cellphone radiation being classified as a possible human carcinogen.

Read Dr. Leszczynski’s full response here in a post on his blog titled, “Is telecom industry so desperate that it calls for a desperate measures?”

Now on to the Fun Part….. Lets Burn Some of Dr. Siddhartha Mukherjee’s Books!

Send us your second-hand copy of the best-seller ‘The Emperor of all Maladies: A Biography of cancer’  to burn and enter to win Air tube Headsets and Flip Case Radiation Shields for a family of up to four.

Help fight this kind of propaganda and those that profit from it!

Send the book to: