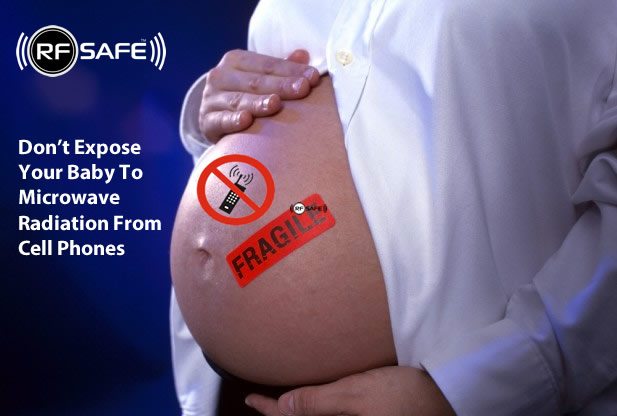 This is revealed in detail on August 29th 2013 by the FCC (Reassessment of Federal Communications Commission Radiofrequency Exposure Limits Policies) ET Docket No. 13-84 http://apps.fcc.gov/ecfs/document/view?id=7520940431

All safety warnings for cellphones (e.g., keep 2.54 inches from the abdomen) are modeled after a full grown man who talks less than half an hour a day. The average toddler’s head weighs about half as much as the one for whom standards have been set.

According to RF Safe there are numerous reasons that women who are pregnant, or who are planning for pregnancy, should be aware of why expecting mothers are at more risk to cell phone radiation dangers.

Pocket shields come in pink or black, and work perfectly for men and women to shield phone radiation when the phone is near the body – for instance in a pocket or purse.

The study is the first of its kind to link cell phone radiation to developmental disorders in offspring, according to author Dr. Hugh S. Taylor, chief of the Division of Reproductive Endocrinology and Infertility at Yale Medical School.

Since 1998 RF (Radio Frequency) Safe has been dedicated to evolving the wireless industries safety standards, by engaging in the business of design, testing, manufacture, and sale of safety technologies to mitigate harmful effects of cell phone radiation.