The major concern of  “Hands Free Use”
is where the cell phone is held when near your body!

When a cell phone is attached to a belt, or in your pocket/purse (As shown in the left picture) radiation can penetrate the area near the cell phone handset much deeper into your body.

Why Are Expecting Mothers At More Risk To Cell Phone Radiation Dangers? 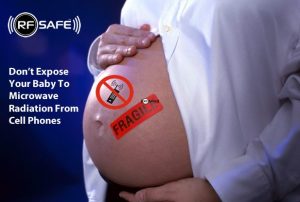 These are numerous reasons that women who are pregnant or planing pregnancy should be aware of:

Enough evidence has been published that author Peter & Lynn McIntosh wrote a book ‘A Subtle Addiction – Attacking the Y Generation’, about keeping a cell phone in a pocket, on the belt or tucked in the bra, which shows documented proof from research groups in many countries of  potentially harmful effects to reproductive organs.

When carried in a pocket,purse,or belt, long hours of exposure to a cell phones low level emission of electromagnetic radiation or microwaves seeking a constant connection with the cell tower network, creates a zone of radiation which over time can potentially cause serious health complications.

These are proven health effects showing men could lose virility and women their ability to bear healthy children. Ignoring potential risk will not make it go away, and cell phone users need to take action to avoid excessive exposure. RF Safe Flip case radiation shields address the issue of radiation safety with style whenever a cell phone is held in close proximity to your body.

“When it comes to cell phones, the bra has become the new purse,” said Dr. Oz, who said millions of women are unknowingly endangering themselves for the sake of convenience.

Dr. John West says, “There definitely seems to be a link between breast cancer rates and where you keep your cell phone,” he thinks there is strong evidence that this could be a factor. West has a growing number of patients with no family history of breast cancer, no breast cancer gene, and young and healthy. Making it shocking to see cancers directly where these young woman carried their cell phones.

When a cell phone is in your pocket or purse, radiation can penetrate the area near the cell phone handset much deeper into your body.

This radiant energy is absorbed much faster than at your head because tissues and organs such as breast, liver, kidneys and reproductive organs all provide much better conductivity than the skull. Simply put most of your major organs have no bone protection like your brain does.

Cell phone manufacturers warn not to hold the phone closer than 5/8 of an inch from the body. To avoid microwave exposure to vital organs and/or fetal development when using your cell phone, a deflective barrier “RF Safe Pocket or Purse Shield” should always be used between you and the handset itself.