The tragic death of Joseph Robinette “Beau” Biden III, the son of Vice President Biden and former attorney general of Delaware, has put attention on a strong feeling of Deja Vu when the obvious — that “cell phone radiation does cause brain cancer” — could be responsible for taking the life of another great American public servant. Cell phone radiation is most likely the source for America’s surge in Brain cancer among politicians who have died at alarming rates since the explosion of wireless communications. It only took one Google search to reveal 23 potential political occupational brain tumor victims that have died since 1995, the source itself makes a disclaimer it is still incomplete from 1922-2010. The list separated for comparison (1995) is the year RF Safe’s Founder last held his daughter as a result of a birth defect attributed to RF Radiation exposure.

This can be found in an iPhone manual: “When using iPhone near your body for voice calls or for wireless data transmission over a cellular network, keep iPhone at least 15 mm (5/8 inch) away from the body, and only use carrying cases, belt clips, or holders that do not have metal parts and that maintain at least 15 mm (5/8 inch) separation between iPhone and the body.”

That’s at least 23 political figures in 15 years that have died from brain cancer during the vast expansion into the wireless age we live in today. But what about the oldest records of political figures that died prior to 1995 of brain tumors before cell phones were standard issue in every Senator’s car, toting their briefcase phones that evolved into today’s commonplace pocket gadgets and wearable computers – COMPLETELY untested for human safety. OK, now let’s take into consideration that over the course of 73 years prior to 1995 there were only 13 political deaths related to brain tumors found while two of them may have also been cell phone users in the very late ’80s, early ’90s. MAKE THE RIGHT CALL! PAY ATTENTION TO THE TRUTH NOT WIRELESS-FUNDED ProPAGANDA! Recently Doctors found that people who use cell phones for more than a year had a 70 percent greater risk of brain cancer than those who used wireless devices for less than a year. The study, published in the International Journal of Oncology, found that people who used mobile phones for more than 25 years had a 300 percent greater risk of developing the dreaded disease than those who used mobile phones for one year or less. The study’s authors concluded that “glioma and also acoustic neuroma are caused by RF-EMF emissions from wireless phones.” EVERY SINGLE ONE of the world’s largest studies – Interphone, Hardell, and the recently concluded CERENAT studies have all pointed towards a common risk to increased brain cancer!

WHY NO CELL PHONE WARNINGS AT A FEDERAL LEVEL?

Washington has lost control of the FCC, this is clear from the statements made in-behalf of the CTIA in recent opposition to Berkeley’s Right To Know law to inform consumers of the risk of RF Radiation exposure, passed on May 12th, 2015. It is no assumption (see video) that the current FCC chairman and former longtime CEO of the same CTIA organization hold the same position on hiding the truth about cell phone radiation hazards. America’s political figures were some of the first to adopt wireless technology as a part of their daily lives, and continue to average more minutes of usage than the average cell phone users even today – thus putting them at more risk in a shorter time. It’s very possible the real numbers of this wireless political graveyard caused by excessive RFR radiation exposure is likely 10 to 100x higher than the list of political figures below whose death’s may have been a direct result of cell phone radiation exposure. The loss of Beau Biden ever being attributed to cell phone radiation won’t come from any White House press releases – as mentioned the former leader of the wireless industry, Tom Wheeler is now the FCC chairman – appointed by Obama after Wheeler raised a reported 700k plus for Obama/Biden’s reelection. The son of Vice President Joe Biden had a glioblastoma multiforme or GBM. This all-too-common tumor has been linked to cell phone use. Another courageous Brain Tumor victim who passed only months ago to the same brain cancer, Jimmy Gonzalez, was also an Attorney like Beau Biden, and they both died of the same cell phone-induced brain cancer. However, campaign contributions weren’t a factor in Jimmy Gonzalez’s life – it was the TRUTH that mattered to him!! He had the courage to stand up for what was right for the American people — and everyone else around the world! Hear his full testimony that has forever changed the world’s perception on the safety of wireless technology! Political Brian Tumor stats seem to speak for themselves, may they all rest in peace, and the truth be revealed! Brain cancer claimed Beau Biden’s life, but there is speculation that he may have had glioblastoma multiforme, a very aggressive and often fatal tumor linked to cell phone usage. Glioblastoma has an estimated two-year survival rate of around 17 percent for patients between 40 and 65 years old. Beau Biden was 46. The cause of GBM is officially unknown but it is thought to arise from astrocytes, the support cells of the brain, and is typically found in the cerebral hemispheres. Most cases of GBM arise directly from mutations in healthy cells. However, a small number may transform into GBM from a previously existing tumor. In 2011, the World Health Organization’s International Agency on Cancer classified this radiation as possibly carcinogenic. In response to concerns about the possible dangers of cell phone radiation, Berkeley, California recently passed an ordinance requiring cell phone retailers to warn purchasers about potential radiation exposure. A study published last year in Occupational and Environmental Medicine found that heavy cell phone use—the highest life-long cumulative duration and number of calls­—was correlated with an increased risk of glioma and meningioma, Science has not clearly identified the factors associated with the development of GBM but some experts believe environmental risk factors, such as RFR radiation from cell phone use, which can cause damage to BBB, and overproduction of ROS, along with other RFR effects observed in hundreds of peer review research papers may contribute to the increases in this brain cancer, according to the experts.

Few consumers are aware of the manufacturer’s recommended minimum body separation from their cell phone because this information is often difficult to find. Thus, most consumers are in the dark about precautions they can take to keep their exposure to microwave radiation below the legal limit. To ensure that the cell phone does not exceed the legal limit, consumers should never keep their cell phone in their pockets or next to their skin. The cell phone is not tested directly against the body because most cell phones would fail the SAR test as the radiation absorption increases dramatically when the cell phone is close to the body. saferemr.com

Cell phones emit radiofrequency electromagnetic fields in the nonionizing microwave spectrum, which could be cancer-causing, although the wireless industry claims are singing the same tune played by big tobacco that definitive association has not yet been established – data is pouring in from all over the world, and many cities are now issuing warnings based on new scientific data in the USA. Berkeley CA passed the first law in the USA on May 12th, 2015 to mandate warning labels that children are at greater risk from exposure to cell phone radiation. 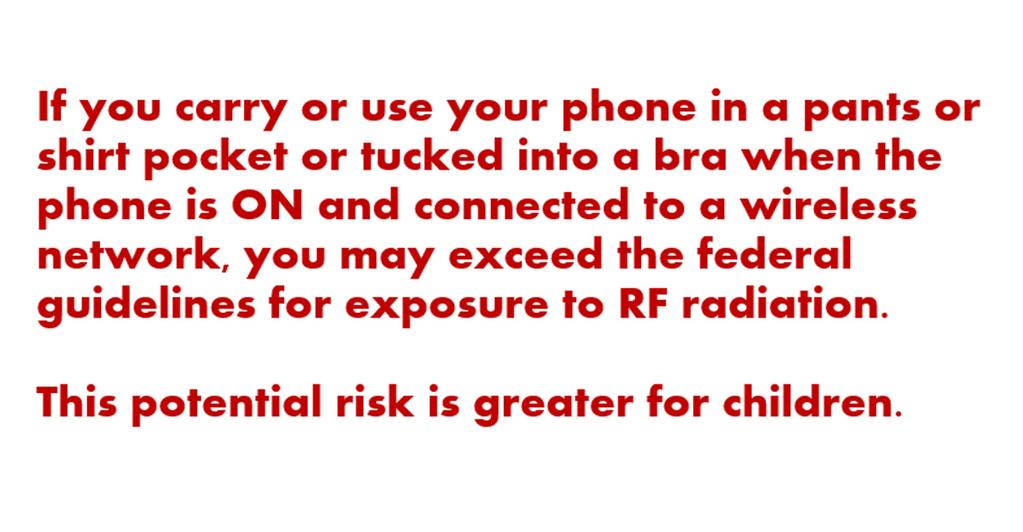 The SAR test, adopted in 1996 by the FCC, was criticized by the U.S. Government Accountability Office in 2012. (5) The test does not reflect those who currently use cell phones, nor does it correspond to the way people use them. Today many children are cell phone users — the child’s brain absorbs twice the radiation as the adult’s brain. Moreover, the artificial head does not contain any metal (e.g., dental fillings, earrings, or eyeglass frames) which could increase the radiation absorption beyond what the laboratory-generated SAR reflects. (5) The FCC assumes that consumers will carry their cell phones in a manufacturer-approved holder that keeps the phone a minimum distance from the body. However, people do not reliably keep their phone away from their body in a cell phone holder. For the SAR test, the FCC allows the manufacturer to choose the separation distance between the cell phone and the test model as long as consumers are informed about the minimum distance tested. Few consumers are aware of the manufacturer’s recommended minimum body separation from their cell phone because this information is often difficult to find. Thus, most consumers are in the dark about precautions they can take to keep their exposure to microwave radiation below the legal limit. saferemr.com

Studies of cell phone usage and brain cancer have focused mainly on adults, but now, because of the dramatic increase in cell phone use among children, researchers are turning greater attention to children’s exposure to radiation from cell phones. Children have thinner skulls and their brains are still developing, and they, therefore, may be more susceptible to brain cancer from the non-ionizing electromagnetic fields emitted from cell phones, according to the Daily Beast. A study in Sweden found a higher risk for glioma in participants who started using cell phones as children or adolescents. Still Waiting For Government Enforced Protection? Look How Easy It Is To Reduce RF Radiation! Review Three Different RF Meters Proving RF Safe Cases Provide Best RF Protection How Do RF Safe Flip Cover Radiation Shields Work? – Technology Review
Phone Search
Archives
Recent Compares
New Arrivals