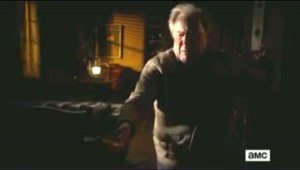 Now what has people talking is the unusual medical condition that has inflicted Chuck McGill — Saul’s older and much more successful brother.

According to Vince Gilligan on the Better Call Saul Insider podcast, Chuck is “allergic” to electricity.  Gilligan explains that EHS is a real ailment! As in, it was not made up for the show — no more than meth was made up for the Breaking Bad series!

So there’s the answer, everybody.  Vince Gilligan has gone on record that the mystery illness is EHS, so that’s pretty much that.  Chuck McGill’s suffers from a real illness which affects more lives than meth addiction.  Meth dealers and addicts combined only account for 0.3 percent of the population as compared 3 to 6 percent of the population is currently suffering ongoing health issues from even acute exposure to potentially deadly electromagnetic radiation.

However, it isn’t a psycho-physical mental condition as media so quickly wants audiences of the AMC show to believe.   RF Radiation (EHS) Electromagnetic Hypersensitivity is very real!

Before getting into the facts behind EHS, as declared by (WHO) the World Health Organization.  If they are correct in their claims that a minimum of 3% of the world’s population may suffer from mild to serve sensitivity to different frequency modulations within the EMF, ELF and microwave radiation spectrum.

What this really means is that it is very possible that a staggering 207,000 viewers (3 percent  of 6.9 million viewers) completely relate to the struggles of EHS that Chuck McGill’s roll portrays on Better Call Saul.

It’s no wonder the birthplace of today’s wireless age, Sweden is the only country in the world to recognize EHS as a functional impairment.  It was the TRUE EHS story behind Per Segerbäck’s illness, an elite telecommunications engineer who worked for a division of the Swedish telecom giant Ericsson — which provided critical insight that has been important in creating governmental policy to address the condition of EHS as a real GROWING health concern among its population.

Swedish EHS sufferers — about 3 percent of the population, or some 250,000 people, according to government statistics — are entitled to similar rights and social services as those given to people who are blind or deaf.  Today, local Swedish governments will pay to have the home of someone diagnosed with EHS electronically “sanitized,” if necessary, through the installation of metal shielding.

Ericsson isn’t the only telecom giant to coverup health effects inflecting its engineers and executives.  Nokia’s former chief technology officer (CTO), Matti Niemelä spent 10 years developing technology used in your beloved Smartphone devices before he fell ill as a result of exceptionally high levels of accumulative exposure to cell phone radiation as well.   Now he’s warning consumers about the health hazards attributed to microwave radiation absorption – it’s to late for him, but it might not be too late for you or your loved-ones! Read Matti Niemelä Story Here

Most people don’t know that the frequencies used in a microwave oven are also commonly used in most consumer wireless devices –  The only difference between the microwave you cook food with and the non ionizing microwave radiation coming from Smartphones, Baby monitors and WiFi routers is the wattage. (See Video Test Results – Radiation from Phone vs Microwave Oven) 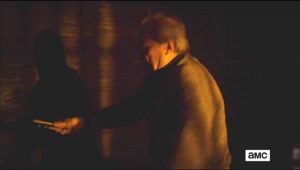 EHS inflects susceptibility groups similar to how particular groups are more susceptible to allergens such as pollen or bee stings.  After reading this through, I think you will agree that Chuck McGill suffering from EHS might give him an advantage to out living his younger brother Saul along with the other partners of his law-firm!

After you learn the TRUE SYORY of how wireless microwave radiation took the life of Jimmy Gonzalez, a brilliant Attorney who lost his battle with three different cell phone induced cancers on November 27, 2014 – Chuck McGill doesn’t sound so crazy anymore.

Alright back to the show, when visitors come to Chuck McGill’s house, they must “ground” themselves and put their cell phones in the mailbox outside.   As crazy as this seems, putting a cell phone inside a mailbox is backed by physics with an explanation as to why such a strange ritual can help someone actually suffering from severe EHS.

It’s called a Faraday cage, named after its discoverer, Michael Faraday who in 1831 discovered the principle of magnetic induction, and in 1836 described the Faraday Cage in his diary.

So is Chuck McGill crazy or just crazy smart when it comes to avoiding harmful man-made RF/EMF at unnatural frequencies? When Chuck McGill demands that all cell phones are put in his metal mailbox, the metal acts as a  Faraday cage which now surrounds any microwave radio frequency transmitters placed inside.  It is the exact same concept used within the cooking cavity of a microwave oven so that microwave radiation doesn’t escape to harm anyone standing in the kitchen. 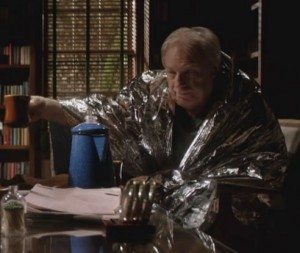 The symptoms that only a select few can feel is a direct a result of a toxic man-made RF Radiation environment — which is responsible for much more than phobias — pain, misery and death aren’t excluded.

The most common range of complaints from EHS sufferers include headaches, itchy skin to blurred vision and heart palpitations.

At one point Chuck tries to protect himself from microwave radiation by wrapping himself in a metallic “space blanket” because Jimmy had the cell phone indoors. Jimmy insists he take the blanket off, and he does.

Chuck looks pained to do so, his hands shake, and he looks itchy and uncomfortable. His “space blanket” is likely made of a fabric that contains silver threads designed to deflect microwave radiation — This same principle of deflecting radiation is used in RF Safe anti radiation phone cases to deflect line-of-sight radiation from the front of a Smartphone.

Watch The Video Below To Learn How Cell Phone Radiation DOES Kill You!

Nov, 27th 2014 In Memory of the real life Attorney Jimmy whose life was taken from exposure to microwave radiation  – PLEASE SHARE!

Based upon the presentation shown below, Pembroke Pines in Florida joined a handful of other US cities in adopting a resolution that warns the public about the potential health effects of cell phone radiation and precautionary safety measures that should be taken.

South Florida Attorney Jimmy Gonzalez testifies in front of the Pembroke Pines Fl Commission regarding the dangers of cell phone use and how using his cellphone for a period of 10 years for well over 30 minutes a day caused cancer to appear in the very spots on his body only where his cell phone was heavily used.

Mr. Gonzalez died in November 2014 at the age of 42.  His passionate presentation from October 2012, however, lives on.  May it help save lives.

“It should become crystal clear that cell phones do cause cancer and that the American people are not being properly warned about cell phones.”

“… do whatever it takes to warn everybody about keeping cell phones away from their bodies.”