EHS (electro-hypersensitivity) was first recognized in 1932 by the German medical doctor Erwin Schliephake. He published scientific data in the German Medical Weekly about his patients that were experiencing unusual symptoms around radio towers. He called this condition “microwave sickness” or “radio wave sickness”. The symptoms he observed were:

This medical doctor knew 80 years ago what corporations and governments are still trying to deny today – that human biology reacts to long-term, non-thermal exposures of microwave radiation well below the “government guidelines” that are supposed to protect humanity.

Between 3% and 10% of the general population now experience one or more EHS symptoms when exposed to microwave radiation or electrical pollution (some estimates go as high as 30% of the population). Some people react severely and become EMF Refugees. 100% of the population is affected biologically by EMF pollution. However, like smoking or asbestos, most will not feel the effects for years or even decades.

The above video is a presentation delivered by Dr. Erica Mallery-Blythe of the United Kingdom. It is one of the most comprehensive lectures on EHS. It was delivered to other medical doctors and contains excellent information on healing EHS.

SYMPTOMS OF EHS CHART
The biological effects from exposure to EMF/EMR include both adverse health effects and loss of homeostasis and well-being. Symptoms vary from patient to patient depending on their physical biology and exposure intensity and duration. Symptoms quickly improve when away from EMF/EMR sources, particularly when the patient moves away from computers, fluorescent lighting, transformers, wireless antenna, cell and cordless phones, appliances and out of proximity to cell phone towers, electrical substations and power lines. All these are potential sources of higher than normal EMF/EMR exposure.  Symptoms recur on returning to the irradiated environment. Over time, sensitivity is increased to smaller and smaller EMF/EMR exposures. (Sage, 2001) 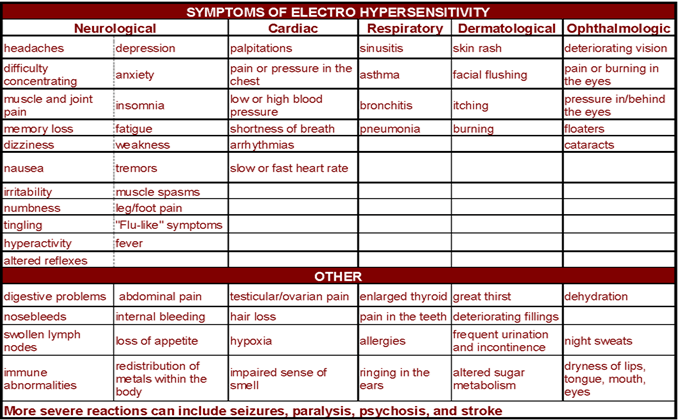