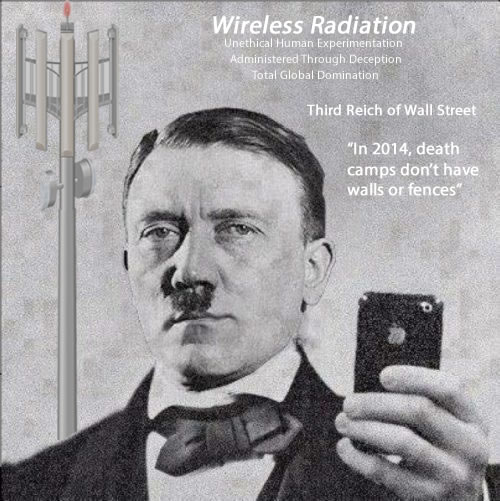 Scientist Barry Trower has announced that the telecommunications industry, with the cooperation of governments around the world, is violating the Nuremberg treaty by allowing human experimentation on a global scale. 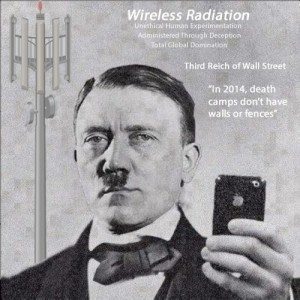 Long after Hitler’s death, inside the industrial complexes of the most valued corporations on earth — the tradition of violating human rights for global domination is alive and well!  This human rights issue is now part of the FCC’s official review into its out-dated SAR safety standards.  This official document covers how universal exposure to microwave radiation from wireless devices complying with existing inadequate safety limits violates the Nuremberg Code of Ethics.  http://apps.fcc.gov/ecfs/document/view?id=7521097778

According to RF Safe, a call for simple wireless precautions isn’t enough to impact the on-going human wireless radiation experimentation.  There is a desperate need to advance the safety of wireless devices by adopting new innovative antenna technologies and revising government safety regulations which currently do not protect children or pregnant women.

The people must call on elected officials to represent their constituents by supporting core values of humanity, without exception, as the underpinning of legislative action that will protect future generation from harmful levels non-ionizing wireless radiation.

With the help of Harvard Law School professor Lawrence Lessig, Berkeley city officials are drafting a measure that will require cell phone retailers to put warning labels on packaging informing consumers that wireless devices could emit cancer-causing levels of radiation.

Over-all the USA’s precautionary stance is being invoked towards actions that would threaten investment markets, rather than towards the public’s health and safety.   Recently the CDC Flip-flopped on precautionary health warnings about cell phone radiation.  Outlined in this post, CDC Avoids Panic Over Cell Phone Radiation Warnings – Protects Profits NOT People – The underlying framework of the destructive political-social milieu is a revolving door between regulatory agencies and industry lobbyist.

In the United States, in a preemptive strike by the wireless industry against the American people, lobbyist succeeded in passing Section 704 of the Telecommunications Act of 1996 which prohibited communities from blocking the installation of infrastructure due to environmental or health concerns.  See FCC Cell Phone Radiation Standard and Tort Immunity by Implied Conflict Preemption and Murray v. Motorola, Inc Cell Phone Radiation Liability

The dangers of microwave technology – which is used in cell phones, wi-fi, cordless telephone and other wireless mechanisms – are well known by scientists. Nevertheless, microwave emitters have been allowed to proliferate on a previously unimaginable scale.

In May 2011 the World Health Organization added cell phone radiation to a list of possible carcinogens, putting excessive cell phone use in the same category as lead and chloroform.

The World Health Organization (WHO) has said it is watching the adult population and reviewing new research, especially important are health effects children seem to be more prone to develop with longer lifetime exposure levels. Barry Trower says the WHO is watching to see how many cancers, how many illnesses, how much neurological damage occurs.

“It is a scientific, health, medical experiment,” Mr. Trower says, “and in their wording you can read that it is an experiment. So what I would suggest to countries and people is they can invoke the Nuremberg treaty and say, ‘I do not wish to be a part of this global experiment. We signed the treaty and you are breaking it.’”

Mr. Trower also references an environmental law (published circa 2004), which says any entity which damages an environmental water supply, a habitat, an environment, any animals, any nature conservation area is liable for the damage.  Mr. Trower  says there is a huge amount of scientific literature to support the claim that the telecommunication industry’s ubiquitous microwave radiation is devastating the honey bees worldwide and leading to potential catastrophic consequences for the food supply.

He reiterates that if one causes bees to die [as the telecom industry’s microwave radiation is thought to do by many scientists], crops to fail, farm animals to die, the whole of the reparation bill can be sent straight to the industry if they are taken into court and it is proven to a jury that they are guilty.

The Department of Interior charges that the FCC standards for cell phone radiation  are outmoded and no longer applicable as they do not adequately protect wildlife.

On Feb 7, 2014, the Director of the Office of Environmental Policy and Compliance of the United States Department of the Interior sent a letter to the National Telecommunications and Information Administration in the Department of Commerce which addresses the Interior Department’s concern that cell tower radiation has had negative impacts on the health of migratory birds and other wildlife.
The Interior Department accused the Federal government of employing outdated radiation standards set by the Federal Communications Commission (FCC), a federal agency with no expertise in health.The standards are no longer applicable because they control only for overheating and do not protect organisms from the adverse effects of exposure to the low-intensity radiation produced by cell phones and cell towers:

”the electromagnetic radiation standards used by the Federal Communications Commission (FCC) continue to be based on thermal heating, a criterion now nearly 30 years out of date and inapplicable today.”

The Department criticized the Federal government’s proposed procedures for placement and operation of communication towers,and called for “independent, third-party peer-reviewed studies” in the U.S. to examine the effects of cell tower radiation on “migratory birds and other trust species.”

“The second significant issue associated with communication towers involves impacts from nonionizing electromagnetic radiation emitted by these structures. Radiation studies at cellular communication towers were begun circa 2000 in Europe and continue today on wild nesting birds.

Nesting migratory birds and their offspring have apparently been affected by the radiation from cellular phone towers in the 900 and 1800 MHz frequency ranges- 915 MHz is the standard cellular phone frequency used in the United States. However, the electromagnetic radiation standards used by the Federal Communications Commission (FCC) continue to be based on thermal heating, a criterion now nearly 30 years out of date and inapplicable today.

This is primarily due to the lower levels of radiation output from microwave-powered communication devices such as cellular telephones and other sources of point-to-point communications; levels typically lower than from microwave ovens. The problem, however, appears to focus on very low levels of non-ionizing electromagnetic radiation.

Radiation at extremely low levels (0.0001 the level emitted by the average digital cellular telephone) caused heart attacks and the deaths of some chicken embryos subjected to hypoxic conditions in the laboratory while controls subjected to hypoxia were unaffected (DiCarlo et al. 2002).

To date, no independent, third-party field studies have been conducted in North America on impacts of tower electromagnetic radiation on migratory birds. With the European field and U.S. laboratory evidence already available, independent, third-party peer-reviewed studies need to be conducted in the U.S. to begin examining the effects from radiation on migratory birds and other trust species.”

Read the full text of the letter, the addendum and citations at:  http://1.usa.gov/1jn3CZghttp://www.ntia.doc.gov/files/ntia/us_doi_comments.pdf