RF Safe offers two different styles of premium quality phone cases designed to provide the highest level of protection from potentially dangerous Smartphone radiation. The methodology used for providing the most effective way to reduce excessive phone radiation exposure has not changed. The F-Series (Folio) and G-Series (Graphene) both use a shielded front flip cover design. Another way they are similar is that radiation shielding is never used on the sides or rear of either case to prevent affecting the smartphone’s software regulating RF power output. Putting aside cosmetic differences for a moment. The biggest difference between the F-Series and G-Series phone radiation cases are the materials used to provide RFR shielding. Why change the RF shielding materials? While there is nothing wrong with conventional metal mesh RF shielding technology that RF Safe has used for 20 years. Advancements in materials cannot be ignored when the company’s vision is to make wireless devices as safe as possible. That advancement in materials is graphene, a “wonder material” that has amazing RF shielding qualities among a long list of spectacular attributes thought to be impossible just 10 years ago. In November 2017, RF Safe renamed the world’s best phone radiation case with conventional RF Shielding to an F-Series (Folio). The term “folio”, from the Latin folium (leaf), has a few distinct meanings in the world of books. The design of RF Safe’s case is a lot like a book, it has a cover on the front and rear, and you must open it like a book to view the screen. The front cover of RF Safe’s case design is referred to as a shielded flip because the front cover can flip over to the rear when texting etc. In order to differentiate phone cases with conventional RF shielding from the latest graphene-based shielding technology — RF Safe’s legacy case is now called an F-Series (Folio) and RF Safe’s phone case using the latest advancements in material science is referred to as the G-Series (Graphene).

1(a) RF Shielded fabric is made from polyester filaments woven with a blend of micro-fine conductive threads. The shielding fabric is then combined with a proprietary layer of CR foam rubber designed to keep your phones display screen looking like new while deflecting potentially harmful radiation away. 1(b) Hypoallergenic silver plated RF Shielding Mesh is used around the earpiece speaker hole to eliminate the chances of any skin reactions to metal alloys commonly used in RF Shielding Materials. Conductive adhesive is used to seamlessly layer the silver shielding mesh and shielded foam together in full compliance with EU Nickel Directive 94/27/EC

RF Safe is the world’s first company to offer graphene-based shielding technology built into a phone case to protect against excessive smartphone radiation exposure in the all-new 2017 RF Safe G-Series (Graphene) Smartphone Radiation Shield. This G-Series case uses a convenient RF radiation shielded front flip cover design identical all protective cases manufactured and sold by RF Safe. A significant body of research into graphene demonstrates that carbon nanostructure-based nanocomposite materials can outperform conventional metal shielding due to their light weight, resistance to corrosion, flexibility, and the advantages don’t stop there. On top of all these, graphene’s excellent conductivity makes it perfect for smartphone safety applications when high-performance radiation shielding is needed. 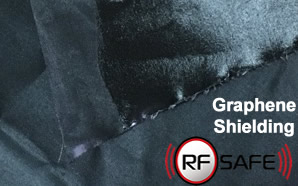 RF Safe Corporation is leading graphene R&D and product development using advanced materials for shielding Smartphone radiation. Last year RF Safe announced its entry into the global industrial graphene market when it became clear that functionalized graphene coatings can outperform conventional RF shielding. As the cost-effectiveness of applying graphene coatings on large surface areas continues to improve, metals will no longer be needed in RF shielding. New technology made for the deposition of graphene coatings provides RF Safe with the capability to apply its graphene-based coatings to many different types of material substrates with controllable levels of surface coverage, thickness etc. to meet precise Smartphone radiation shielding requirements. The graphene shielding inside the front cover will not interfere with call quality or battery power. When shielding phone radiation from only the front of the phone that is facing your head or body – you are blocking only radiation that the body would have absorbed and that shielded energy wasn’t available for a cell tower because it would have been absorbed into human tissues distributed as heat into the body.

The F-Series (Folio) and G-Series (Graphene) both use a shielded front flip cover design requiring the shielded flip cover remains between the user and wireless device. 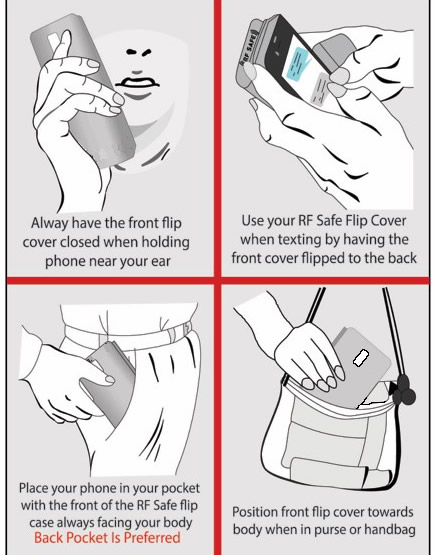