These accessories include an air-tube headset, ferrite bead and pocket shield for the most comprehensive control over cell phone radiation.

While the debate rages on about several health hazards from cell phone radiation – Brain tumors, breast cancer, even links to autism are being questioned.

When health hazards are in question, always “err on the side of caution,” says John Coates, CEO of RF SAFE. He’s not the only one calling for people to be cautious when using a cell phone.

Devra Lee Davis is also a major critic of those saying cell phones are safe, and points out that industry insiders have conveniently war-gamed legitimate science to obscure the truth about cell phone health hazards.

She’s no online vigilante critic against the wireless industry either – Devra Davis, Ph.D is an Award-winning scientist and author, she is Founder of Environmental Health Trust, a National Book Award finalist, Carnegie Science Medal winner, author of Disconnect–the truth about cell phone radiation and health, what the industry has done to hide it, and what you can do to protect your family, Dutton, coming September, 2010, and Visiting Professor, Georgetown University. She was the Founding Director of the Board on Environmental Studies and Toxicology at the U.S. National Academies of Sciences, 1983-1993, a Presidential appointee in the Clinton Administration to the National Chemical Safety and Hazard Investigation Board, and Founding Director of the Center for Environmental Oncology at the University of Pittsburgh Cancer Institute, 2004-2009.
RF Safe points out that more and more highly respected medical professionals like Devra Davis are coming forward with astounding evidence that cell phones are dangerous and pose a very serious health risk, especially for young children using smartphones.

The point being made about children being at more risk stems from their skulls being thinner, and radiation traveling much deeper into a 10 year old’s head than a 21 yr old. Exposure to other forms of electromagnetic radiation, such as with UV sunlight, does show us that DNA damage from radiation is accumulative over time– consequently we know the more exposure, started at a younger age – presents the highest risk level. 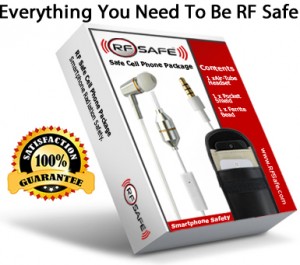 RF Safe’s Founder said, “Parents that purchased their children smartphones need to consider these risk factors and learn more about RF Safe accessories for cell phone radiation safety that no cell phone user should be without”. In fact, there is no reason that cell phone companies shouldn’t supply the top three phone accessories at RF Safe to shield smart phone users from radio frequency radiation he goes on to say.

1) RF Safe Headset – Acoustic Air-tube design prevents phone radiation from traveling up a conductive wire into a phone users head. RF Safe headsets allow users to keep a safe distance from radiation when listening to music on a smart phone, or at work where important calls can be given the privacy of a hands-free headset providing a safe alternative to holding the phone against the ear. RF Safe Headsets are available in many different colors to fit anyone’s style.

3) RF Safe Ferrite Bead – These are well known for impeding interference of high frequency radiation down low frequency wires. RF Safe’s 3.5mm clam-shell ferrites simply clip on the end of a headsets wire that plugs into a cell phone. This simple accessory works on any headset wire to block the wire from acting as a conductor for high frequency microwave radiation.

RF SAFE is the world’s premier provider of cell phone radiation protection accessories and informational data. Since 1998 RF (Radio Frequency) Safe has been dedicated to evolving the wireless industries safety standards, by engaging in the business of design, testing, manufacture, and sale of safety technologies to mitigate harmful effects of cell phone radiation!