Men take note: Storing your cellphone in your pants pocket may result in impaired sperm, lower testosterone and may cause infertility. New research suggests that carrying around a cellphone in your pocket could lower sperm motility and viability.

Previous research has suggested that Radio-frequency electromagnetic radiation (RF-EMR) emitted by the devices can have a detrimental effect on male fertility. Most of the global adult population own mobile phones, and around 14% of couples in high and middle income countries have difficulty conceiving.

Until now, the research on the existence of an smartphone-sperm apocalypse has sent mixed signals. So, a team led by Dr Fiona Mathews, of Biosciences at the University of Exeter, conducted a “meta-study” or study of studies published in the journal Environment International on June 10, 2014 – Which found that cell phone usage was associated with an 8.1 percent descent in sperm motility (how fast the little guys swim) and 10 percent change in sperm viability (if they can make it to the egg alive).

“Given the enormous scale of mobile phone use around the world, the potential role of this environmental exposure needs to be clarified. This study strongly suggests that being exposed to radio-frequency electromagnetic radiation from carrying mobiles in trouser pockets negatively affects sperm quality,” explained University of Exeter’s professor Fiona Mathews.

“This could be particularly important for men already on the borderline of infertility, and further research is required to determine the full clinical implications for the general population.” 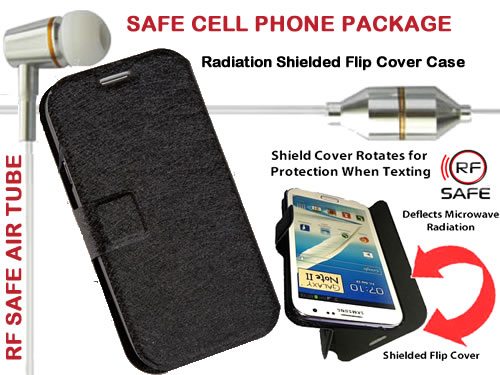 HERE ARE 7 REASONS WHY ALL MEN SHOULD OWN AN RF SAFE FLIP COVER RADIATION SHIELD!

Ask yourself this. Is your male reproductive health at risk from smartphone radiation?

There is evidence that long time cell phone usage affects brain tissue in a negative way.

It’s also a studied fact that cell phone usage weakens the blood and brain barrier which then allows more toxins and chemicals to disturb your hypothalamus and pineal gland, this eventually leads to lower levels of circulating testosterone.

In a Saudi-Arabian study the researchers found out that mobile networks caused fatigue and headache. In the study they also noted that eventually when you go to sleep with your mobile phone next to you, the mobile networks will disturb your normal sleeping cycles, by making the REM-stages shorter.

A small 2008 study found that participants took an average of six minutes longer to reach deep sleep after being exposed to mobile phone radiation. They also spent an average eight minutes less time in the deepest stage of sleep. This is believed to be the most refreshing part of the sleep cycle

‘We can now say that exposure to radiation before bed – at a level equivalent to making a call on a mobile for 30 minutes – does seem to lead to a small increase in electrical activity in the brain,’ says Dr Sarah Loughran of the Australian centre for electromagnetic bioeffects research at the University of Wollongong.

In a recent erectile dysfunction study the researchers found out that men who had serious case of ED were 2.6 times more likely to keep their mobile phones in the front pocket.

This has something to do with the fact that your phone would then be very close to your package, which would eventually disturb your testicles ability to produce testosterone.

There’s no point of eating any antioxidants to improve testosterone levels if you keep your phone next to your balls everyday, since the radiation will oxidize the leydig cells inside your testicles and that occurrence leads to low testosterone.

Study clearly show that cell phone radiation and mobile networks were able to alter human DNA in a negative way. When that alternation starts to happen inside testicles you’re in trouble.  “These findings have clear implications for the safety of extensive mobile phone use by males of reproductive age, potentially affecting both their fertility and the health and wellbeing of their offspring” (De Iuliis 2009).

Cell phone usage has also been linked to mitochondrial damage inside the leydig cells (the cells that produce testosterone inside testicles).

In studies with male rats, exposure caused degeneration in the seminiferous tubules, reduction in the number of Leydig cells and testosterone production as well as increases in luteinizing hormone levels and apoptotic cells.

The same study that found out about the mitochondrial effects mentioned above, also found out that cell phone radiation and mobile networks cause infertility with lowered sperm motility, volume, and quality.