Although most scientific and public attention on the issue of the safety of cell phone radiation has focused on evidence suggesting an increased risk of brain tumors (Baan 2011), a little-noticed but growing body of research points to a new concern – sperm damage (La Vignera 2012). 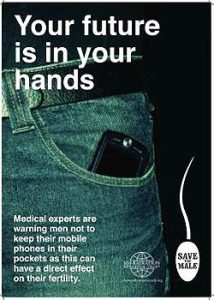 In a comprehensive review of the published scientific literature, the Environmental Working Group found 10 human studies that have identified a startling variety of changes in sperm exposed to cell phone radiation. In the most striking findings, men who carried their phones in a pocket or on the belt were more likely to have lower sperm counts and/or more inactive or less mobile sperm. These findings accord with similar results in laboratory animals.

Collectively, the research indicates that exposure to cell phone radiation may lead to decreases in sperm count, sperm motility and vitality, as well as increases in indicators of sperm damage such as higher levels of reactive oxygen species (chemically reactive molecules containing oxygen), oxidative stress, DNA damage and changes in sperm morphology (see summary below).

Many men who talk on a cell phone using a Bluetooth device or other headset keep the phone in a pants pocket or clipped to a holster. This exposes their reproductive organs to cell phone radiation, and several studies have found lower sperm count and/or poorer sperm quality in men who use their phones this way than in those who do not.

Scientists have yet to identify a mechanism by which cell phone use might cause such effects (Makker 2009). However, the research appears to rule out the possibility that the changes are caused by simple heating, which is considered to be a possible source of some radiofrequency radiation-related health problems (De Iuliis 2009; Volkow 2011).

The findings are particularly significant in light of the fact that infertility affects approximately 15 percent of couples of reproductive age, and nearly half of these cases are linked to male fertility (Sharlip 2002). The number and consistency of the findings raise the possibility that cell phone radiation could be contributing to this significant public health problem and demand further investigation.

Studies linking cell phone exposure to harmful effects on sperm have been done in the United States, Australia, Austria, Hungary, Poland, Turkey and South Africa, using diverse methodologies. In some, scientists compared sperm counts and sperm health in men who wore cell phones on the hip with those who carried them elsewhere on the body or did not use cell phones at all. In others, researchers exposed sperm to cell phone radiation under laboratory conditions. In still others, scientists examined whether there was a correlation between sperm health and the intensity of cell phone use among men undergoing evaluation for infertility.

Laboratory studies on the effects of cell phone radiation on rats, rabbits and other animals have found similar effects on reproductive health (Kesari 2011; Mailankot 2009).

A number of research papers include unambiguous statements on the potential of cell phone radiation to affect men’s reproductive health:

Given the backdrop of increasing infertility rates (Swan 2006), the research findings should be a wake-up call to male cell phone users who are trying to have children or may want to in the future.

Even as scientists continue to gather new data on health risks from cell phone radiation, the findings underscore that consumers should practice simple, precautionary safe-cell-phone-use habits, such as keeping the phone away from the body, in order to protect their health and fertility. Men, in particular, should avoid carrying a cell phone on the belt or in a pants pocket when in use.

What About Women’s Health?

There have been similar findings in two human studies. UCLA researchers reported that cell phone exposure during pregnancy and after birth was associated with behavioral problems in young children (Divan 2008; Divan 2012). This line of research is just beginning, but a recent review article emphasized that cell phone radiation might impact reproduction and development in both men and women (Merhi 2011).

Table: Peer-reviewed studies of the effects of cell phone radiation on male reproduction

Exposure to radiofrequency electromagnetic radiation (RF-EMR) from various wireless devices has increased dramatically with the advancement of technology. One of the most vulnerable organs to the RF-EMR is the testes. This is due to the fact that testicular tissues are more susceptible to oxidative stress due to a high rate of cell division and mitochondrial oxygen consumption. As a result of extensive cell proliferation, replication errors occur, resulting in DNA fragmentation in the sperm. While high oxygen consumption increases the level of oxidative phosphorylation by-products (free radicals) in the mitochondria. Furthermore, due to its inability to effectively dissipate excess heat, testes are also susceptible to thermal effects from RF-EMR exposure. As a result, people are concerned about its impact on male reproductive function. The aim of this article was to conduct a review of literature on the effects of RF-EMR emitted by wireless devices on male reproductive hormones in experimental animals and humans. According to the findings of the studies, RF-EMR emitted by mobile phones and Wi-Fi devices can cause testosterone reduction. However, the effect on gonadotrophic hormones (follicle-stimulating hormone and luteinizing hormone) is inconclusive. These findings were influenced by several factors, which can influence energy absorption and the biological effect of RF-EMR. The effect of RF-EMR in the majority of animal and human studies appeared to be related to the duration of mobile phone use. Thus, limiting the use of wireless devices is recommended.

Existing animal and human data on the effect of RF-EMR emitted from wireless devices on male reproductive hormones are inconsistent and difficult to evaluate due to the heterogeneity of study design. However, most studies are consistent with the assertion that long-term exposure to RF-EMR from mobile phones and Wi-Fi devices can disrupt male reproductive hormones, particularly testosterone. Thus, avoiding long-term and excessive use of mobile phone is advisable to reduce the detrimental effect of RF-EMR.

Challenges on the effect of cell phone radiation on mammalian embryos and fetuses: a review of the literature

Cell phones operate with a wide range of frequency bands and emit radiofrequency-electromagnetic radiation (RF-EMR). Concern on the possible health hazards of RF-EMR has been growing in many countries because these RF-EMR pulses may be absorbed into the body cells, directly affecting them. There are some in vitro and in vivo animal studies related to the consequences of RF-EMR exposure from cell phones on embryo development and offspring. In addition, some studies have revealed that RF-EMR from cellular phone may lead to decrease in the rates of fertilization and embryo development, as well as the risk of the developmental anomalies, other studies have reported that it does not interfere with in vitro fertilization or intracytoplasmic sperm injection success rates, or the chromosomal aberration rate. Of course, it is unethical to study the effect of waves generated from cell phones on the forming human embryos. Conversely, other mammals have many similarities to humans in terms of anatomy, physiology and genetics. Therefore, in this review we focused on the existing literature evaluating the potential effects of RF-EMR on mammalian embryonic and fetal development.

Mobile phones are commonly placed on the lap or in pockets (Swerdlow et al., 2011), therefore exposing the genital area to RF-EMF. Germ cells are more susceptible to RF-EMF, as they are rapidly dividing through meiosis and mitosis. EMF induces modifications in cellular levels such as activation of voltage-gated calcium channels, formation of free radicals, protein misfolding and DNA damage (Altun et al., 2018). In the general population, pregnant women are at specific risk of exposure to environmental RF-EMF because of their higher oxygen consumption and amniotic fluid-induced ROS production (Çiğ and Nazıroğlu, 2015) (Fig. 1). Individuals should reduce their rate of exposure to RF-EMF-emitting devices including mobile phones (Okechukwu, 2020) as electromagnetic waves enhanced the amount of oxygen free radicals in the body that led to disturbance of spermatogenesis process and variations in spermatozoa membrane, which resulted in changes in capacitation, acrosome reaction and therefore disorder in the process of spermatozoa binding to the oocyte and failure of normal fertilization both in vivo and in vitro (Fatehi et al., 2018). In addition, exposure to RF may lead to a decline in ovarian follicle reservoirs at the start of the prepubertal time (Türedi et al., 2016).

To reduce the contact with RF-EMR radiated by cell phones, people should avoid keeping their phones inside their pockets, also use of hand-free materials and gadgets and mobile covers limit direct expose of cell phones to the body (Okechukwu, 2020). Also, people do not appreciate that a cell phone is a small base station and usually underrate the importance of distance between the cell phone and the body (Cousin and Siegrist, 2010). In analyzing the relationship between the distance of cell phone antenna from the body and SAR, Hossain and colleagues reported that increasing the distance of cell phone from the body led to diminishing of both electric and magnetic field strength to the body, therefore reducing SAR values (Hossain et al., 2015). Furthermore, it is known that the EMF decreases with distance and magnetic induction…

At this time, it is difficult from the available animal studies to document confidently the role of RF-EMR exposure on human embryo development, both in vivo and in vitro. Further investigations with complementary techniques will be necessary to understand the mechanism of action of RF-EMR emitted by cell phones and the consequences on mammals, particularly human beings.