According to RF Safe, it has now been proven that human toxicity to microwave radiation depends not only on power, but frequency as well. High-frequency ionizing radiation, such as gamma or X-rays, can damage DNA molecules directly, and low-frequency radiation such as cell phone radio waves, classified as non-ionizing were first recognized as having the potential of a Microwave effect (second stage DNA damage) in a paper published January 20, 2001 Penn State University, DNA And The Microwave Effect https://www.rfsafe.com/dna-and-the-microwave-effect/. 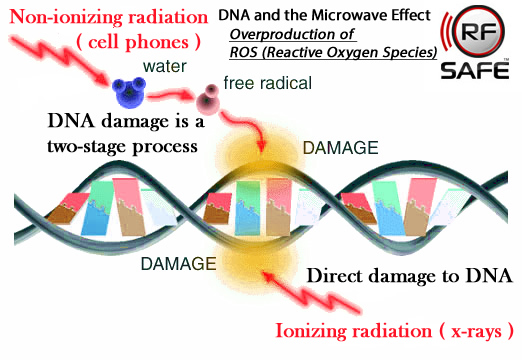 The potential mechanisms involved were theorized as a two stage process that invoked a cascading effect that broke down DNA bonds.

The energy level of a microwave photon is only 10-5 eV, whereas the energy required to break a covalent bond is 10 eV, or a million times greater. Based on this fact, it has been stated in the literature that “microwaves are incapable of breaking the covalent bonds of DNA.

“Mobile phone EMR is non-ionizing radiation, still powerful enough to heat body tissue the same way a microwave oven cooks food, but what is important to understand is that profound changes to biological processes happen at below thermal levels of exposure,” says John Coates, founder of RF Safe Corporation.

These studies show that the debate about cell phone radiation being hazardous or not is over, and it is time to create a public policy that will address these issues as bio-effects have been observed at a rate of 92 percent in 80 peer-reviewed studies. Therefore, it is important for governments of different countries to come together to create legislation that will limit cell phone radiation. The must be mandates for reduction in radiation levels by forcing cell phone manufactures and service providers to use different technologies than the existing ones which are available today (Vortis Technology as an example).  Alongside, users should be made aware of the possible side-effects of cell phone use, so that they can make alternative choices such as using an RF Safe headset and RF Safe Flip Cover Shield

The overproduction of chemically reactive molecules containing oxygen known as ROS (Reactive Oxygen Species) is proven to damage DNA – a precursor for cancer and many other health effects.

“Unexpectedly, a strong non-thermal character of biological effects” has been documented, the group of scientists wrote.

In the peer reviewed editorial “Low intensity radio-frequency radiation: a new oxidant for living cells” in the scientific journal “Oxidants and Antioxidants in Medical Science” on March 29th 2014 a group Scientists reported that of 80 studies, they had assessed, 92,5 % (= 76 studies) confirmed that mechanisms of inflicting cellular damage happened at below thermal levels. http://www.ejmanager.com/mnstemps/65/65-1394615302.pdf?t=1398177912

Low intensity radio-frequency radiation (RFR) emitted by wireless phone devices “could lead to mutagenic effects through expressive oxidative damage of DNA”, because “the substantial overproduction of ROS in living cells under low intensity RFR exposure could cause a broad spectrum of health disorders and diseases, including cancer in humans.”

Coates says, those that have long stood the ground that cell phone are completely safe, must accept that not only has the mechanism been described, and confirmed in 92% of the studies peer viewed. There is also physical proof that can be seen with the human eye using a fluorescence based Digital Imaging System developed for measuring DNA damage using single cell gel electrophoresis” (Comet assay) https://www.rfsafe.com/fact-dna-damage-safe-cell-phone-radiation-levels/