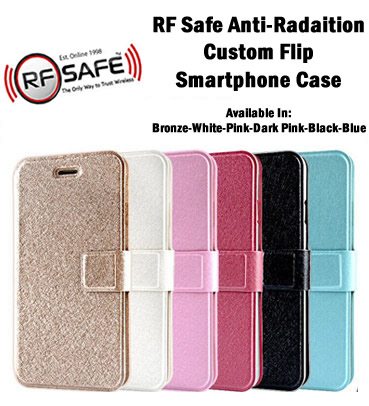 RF Safe Corporation announces a new proprietary shielding technology designed to combat the potential dangers of cell phone radiation exposure. The new process reduces the thickness of Peel-n-Shield™ to only 1mm for shielding flip cases with small tolerances between flip cover and phone. 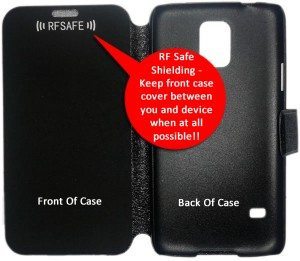 The basic requirement of any RF Radiation shielding is that it is electrically conductive. An example of RF Safe EMI shielding fabric is Silver plated-metalized woven nylon (Peel and Shield 8×11 Sheet) used in many of RF Safe’s shielding products.

Many different metals can be used, however RF Safe suggest only silver for its conductive shielding properties and to prevent skin reactions. Nickel based shielding are not used for this reason.

A) Phone Cases with Microwave Shielded Flip Covers (Deflective Barriers) shielding between the user and phone that blocks radiation. This is the chosen technology used in RF Safe Flip Cases.

The company’s Founder, John Coates said “RF Safe’s flip cover cases only incorporate shielding mechanisms which utilize reflection, as absorption (attenuation) is never used to prevent affecting the phones software regulating RF power out-put. It’s only acceptable to use absorption technologies on wires (Ferrite Beads), such as on a headset plugged into a cellphone, but never on the cell phone itself.

According to RF Safe, young men wanting to start a family that wish to protect their manhood may want to invest in an RF Safe cell phone flip case under $40 that keeps a radiation shield between the cell phone users body and wireless device.

There has been much debate on a cell phone cancer link, but now there is a growing body of research points to a frightening concern – sperm damage.

RF Safe flip cases are a perfect solution for the growing concern of men safely carrying a cell phone in their pocket without excessive microwave exposure to male reproductive organs.

RF Safe smartphone cases have a flip cover that is lined with Peel-n-Shield™ made from sliver plated microwave shielding that is incorporated into a soft foam to provide maximum cell phone radiation protection along with unmatched protection for a smartphones display screen.

RF Safe flip cases are very stylish and designed in such a way that makes them very effective in shielding phone radiation from a cell phone user’s body by simply keeping a deflective barrier between the user and wireless device.

RF Safe flip case radiation shields provide a barrier against phone radiation without compromising the aesthetics as well as functionality of the cell phone. Unlike pouches that block RF Radiation which are commonly found online, RF Safe flip cases allow full access to all the phones ports and features without removing the flip case.

It is not only RF Safe’s mission to provide the best solutions for reducing RF exposure but to make sure that all of RF Safe’s products are highly functional, well crafted and worthy to be used by RF Safe’s customers around the world according to whatever purpose they have in mind.

“RF Safe’s technical and sales staff looks forward to helping concerned cell phone users in any way that we can – RF Safe’s 16 yrs of experience in the safest ways to reduce cellphone radiation exposure is only a click or call away.” says Coates

RF SAFE is the world’s premier provider of cell phone radiation protection accessories and informational data. Since 1998 RF (Radio Frequency) Safe has been dedicated to evolving the wireless industries safety standards, by engaging in the business of design, testing, manufacture, and sale of safety technologies to mitigate harmful effects of cell phone radiation.[/vc_column_text][/vc_column][/vc_row]