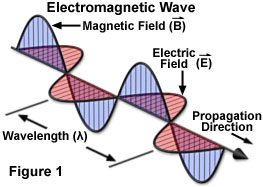 The word radiation is often thought of as referring to the emanations from radioactive material and x-rays. However when scientists use the word radiation they are usually referring to electromagnetic radiation (EMR) which can be emitted from such sources as radio cell phones, TV transmissions, light from the sun as well as x-ray machines.

Electromagnetic radiation has electric and magnetic field components and passes through space at the speed of light – about 300,000,000 metres per second (186,000 miles per second).

Microwave (MW) and radio frequency (RF) radiation is electromagnetic radiation that is lower in frequency and therefore longer in wavelength than infrared radiation. “Radiofrequency” is the name given to that section of the electromagnetic spectrum from frequencies of 300 kHz to 300 GHz. In general the section of the electromagnetic spectrum from frequencies of approximately 300 MHz to 300 GHz and wavelengths of approximately 1 meter (m) to 1 millimeter (mm) are called microwaves. Although some consider microwaves not to include lower frequencies and to start at 800 MHz with a wavelength of 37.5 centimeters (cm).

The term “microwaves” can be misleading. The wavelengths are not really “micro” in size because they range from 1 meter to the shortest which is 1 millimeter not 1 “micro” meter. (See also Extremely Low Frequency (ELF) and Electromagnetic Fields (EMF’s)

Sources of radio frequency and of microwaves are primarily:

New studies suggest hazards exists at Non-thermal levels of rf exposure. This should be a great concern for cell phone users who want to maximize their safety.