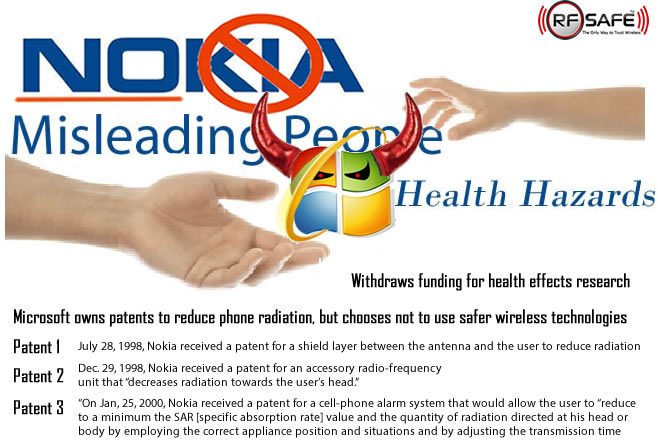 Let’s keep this simple.  What’s safer for your health is smarter, and smarter Smartphone technology is being held back by corporate giants fearful over claims that radiation from wireless devices will harm your health.

Joanne Suder, a Baltimore-based plaintiff attorney, said “Dozens and dozens” of patents have been filed by the industry to create radiation-shielding technology.

Nokia filed one of these patents on July 28, 1998, according to the U.S. patent office. The patent contains a description for the creation of a device that would protect the cells in a user’s head from radiation.

“It has been suggested that radio frequency irradiation may stimulate extra growth among supportive cells in the nerve system, which in the worst case it has been suggested could lead to a development of a malignant tumor,” the Nokia patent states. “Although the consequences described above have not been scientifically verified, the uncertainty has some effects by reducing the speed of growth of the market of radiophones.” Motorola, Ericsson and other handset manufacturers own similar patents, Suder said. “Those patents aren’t snake oil,” she said. “They’re from the defendants’ mouths themselves.”

[pullquote]Cleared to start court proceedings in 2015, Thirteen consumers have filed lawsuits in Washington D.C’s superior court that may shed light on the cell phone industry’s alleged cover-up regarding the dangers of exposure to cell phone radiation and may prove to be the start of a big wave of product liability litigation.[/pullquote]

Around the time of the proceedings, Nokia spokesman Keith Nowak dismissed the Nokia patent touted by Suder as a patent “on antenna efficiency,” not a disease-fighting tool. “The more efficiently the phone can work, the better” it is for the consumer, Nowak said. However, while Nokia makes these claims to the media, these claims aren’t what Nokia engineers wrote in describing the patent which make direct reference to health hazards and brain tumors.

RCRwireless reported that, wireless consumer advocate Carl Hilliard will reveal that Nokia Corp., Motorola Inc. and L.M. Ericsson have received patents since the mid-1990s to reduce mobile-phone radiation. The new information, taken directly from patents, is expected to be introduced in various mobile-phone cancer lawsuits pursued by Hilliard, Baltimore lawyer Peter Angelos and others.

Nokia ties thier patented inventions directly to suspected health risks from cell phone radiation.  Nokia received a patent for a shield layer between the antenna and the user to reduce the electromagnetic irradiation of the user.

On Jan, 25, 2000, Nokia received a patent for a cell-phone alarm system that would allow the user to “reduce to a minimum the SAR [specific absorption rate]value and the quantity of radiation directed at his head or body by employing the correct appliance position and situations and by adjusting the transmission time.”

During these early years when Nokia was actively pursuing safer wireless technology, Matti Niemelä was working his way up the ranks at Nokia, and went on to be Nokia’s chief technology officer (CTO) — a Job he continued until the Smartphone devices he used caused him to fall ill as a result of exceptionally high levels of accumulative exposure to cell phone radiation.   Now he’s warning consumers about the health hazards attributed to microwave radiation absorption October 19, 2014

Earlier in 2014, after proof of biological changes in skin cells were observed “at below” what is now considered by the FCC as a safe level of radiation absorption —  Nokia withheld health effects research funding from world renown scientist Dr Dariusz Leszczynski, Adjunct Professor, Division of Biochemistry and Biotechnology at the University of Helsinki and a member of a working group of 31 scientists from 14 countries constituted by the World Health Organization (WHO); which classified cell phone radiation as a group 2B carcinogen.

Nokia spokesperson Maija Taimi said that Microsoft has acquired mobile device business of Nokia and therefore handsets related queries should be sent to them, including those related to the biological safety of Nokia’s Smartphone devices.  Nokia Says Microsoft Must Handle Cell Phone Radiation Health Concerns

Busting the myths produced by the wireless industry about lack of evidence on harm caused by cell phone radiation, Finnish scientist Dariusz Leszczynski said, “long-term exposure to cell phone radiation, on an average of thirty minutes a day over ten years, causes an increased risk of brain cancer.”

“The Interphone, Hardell and the recently concluded CERENAT studies in France have all pointed towards a common risk to increased brain cancer,” said Leszczynski

It is highly recommended that anyone concerned with wireless radiation exposure follow Dariusz Leszczynski’s presentation and lecture dates from his blog at https://betweenrockandhardplace.wordpress.com