The City of Berkeley is being represented pro bono by Lawrence Lessig, Roy L. Furman Professor of Law and Leadership at Harvard Law School. Formerly, Lessig was a Professor at Stanford Law School.

Since 1996, the FCC has required that all cell phones sold in the United States not exceed a SAR limit of 1.6 watts per kilogram (W/kg), as averaged over one gram of tissue.

The problem addressed by Berkeley’s “right to know” ordinance arises because most new smartphones manuals make the process of disclosing a smartphones SAR value very difficult, and the problem is made even worse when retail store employees selling smartphones aren’t informed on SAR values of the devices sold to the public.

The current court approved message reads, “To assure safety, the federal government requires that cellphones meet radio frequency (RF) exposure guidelines. If you carry or use your phone in a pants or shirt pocket or tucked into a bra when the phone is ON and connected to a wireless network, you may exceed the federal guidelines for exposure to RF radiation. Refer to the instructions in your phone or user manual for information about how to use your phone safely.” 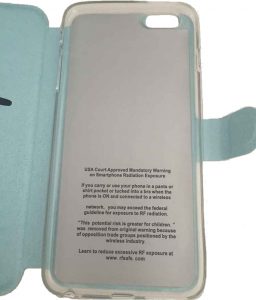 With great thanks to 1st Amendment rights, the above safety message is now printed inside most of RF Safe cases designed to deflect excessive cell phone radiation away from smartphone users in support of Berkeley’s “right to know” ordinance contested by the CTIA.

A log of developments on the Berkeley ‘Cell Phone Right to Know’ ordinance can be viewed here:http://www.saferemr.com/2014/11/berkeley-cell-phone-right-to-know.html