Keepin’ it REAL, Ebola Is Deadlier Than Cell Phone Radiation 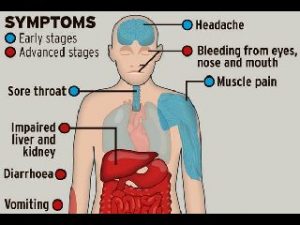 The Symptoms Of Ebola Virus

I wasn’t even in high school yet, but I can remember the day in 1976 that news headlines first informed the world about a virus which was so deadly and painful; it must have escaped the pits of hell.   The fear was easily seen on faces as nuns at my school gathered us to pray for those suffering from this never before heard of deadly Ebola virus.

That Ebola scare didn’t last long, and personally I may not have thought of it again until Dustin Hoffman and Morgan Freeman starred in the thriller movie “Outbreak” in 1995.    The fictional movie brings up various “what-if” scenarios, martial law and even bombing a town to stop the Ebola-like virus from spreading.   The movie presents a view that the US Government is willing to do whatever it takes to protect the population as a whole.

Now nearly 40 years after the first known outbreak — The threat arrives on American soil only weeks after CDC officials assured us how unlikely this scenario was to take place, but now we know the truth — it was really “more than likely going to happen,” because it is happening!

An all too familiar tone from the CDC downplaying risk when large commercial interest are at stake.  No different than what the CDC has done on downplaying the issue of health effects from cell phone radiation.

Credibility of CDC Under Question

Statements being made recently by CDC officials defy all known logic to contain the virus.

During a press conference held on Saturday Oct 4th,  Centers for Disease Control and Prevention Director Tom Frieden claimed “A travel ban to the countries facing an Ebola outbreak could paradoxically make the problem worse,” and warned that a travel ban could make it harder to get medical care and aid workers to regions dealing with the outbreak.

This stinks of looking out for corporate interest as clearly as the flip-flop the CDC did on precautionary statements for cell phone radiation risk in September 2014.   There’s been a lot of military cut backs since I’ve flown around in old C-130’s and DC-9 transports, but our military is well equipped to handle the logistics of getting relief supplies where they are needed, without having to risk millions of Americans at some of our country’s busiest airports.

There needs to be a law to prevent regulatory agencies like the CDC from taking on the responsibility of balancing any financial impact that corporations experience over potential risk avoidance measures taken to protect the public at large.  Corporate influence on public safety measures are common in many agencies; the industry led FCC who many strongly protest against,this is a good example. (Video)

There are signs of commercial industry influencing regulation everywhere, but this is going too far! Ebola is far too deadly to play any financial market impact games.

America’s Commander-in-chief needs to step it up! Obama must declare war on Ebola! Not like the Outbreak movie bombing towns, but open the full resources of the United States of America to containing and eliminating this threat to the American people and the world!

While there is no cure, we do know that the Ebola virus enters your body through estrogen receptors and researchers are exploring this mechanism to prevent fatal outcomes of the virus with drugs on the market today.

Ebola viruses remain a substantial threat to both civilian and military populations as bioweapons, during sporadic outbreaks, and from the possibility of accidental importation from endemic regions by infected individuals. Currently, no approved therapeutics exist to treat or prevent infection by Ebola viruses. Therefore, we performed an in vitro screen of Food and Drug Administration (FDA)– and ex–US-approved drugs and selected molecular probes to identify drugs with antiviral activity against the type species Zaire ebolavirus (EBOV). From this screen, we identified a set of selective estrogen receptor modulators (SERMs), including clomiphene and toremifene, which act as potent inhibitors of EBOV infection. Anti-EBOV activity was confirmed for both of these SERMs in an in vivo mouse infection model. This anti-EBOV activity occurred even in the absence of detectable estrogen receptor expression, and both SERMs inhibited virus entry after internalization, suggesting that clomiphene and toremifene are not working through classical pathways associated with the estrogen receptor. Instead, the response appeared to be an off-target effect where the compounds interfere with a step late in viral entry and likely affect the triggering of fusion. These data support the screening of readily available approved drugs to identify therapeutics for the Ebola viruses and other infectious diseases. The SERM compounds described in this report are an immediately actionable class of approved drugs that can be repurposed for treatment of filovirus infections.