Here’s another reason, besides RF radiation, that you shouldn’t allow your kids to sleep with their cell phones at night.

There is more outrage in the news over fine print warnings about cell phone hazards that you’ve most likely never seen. 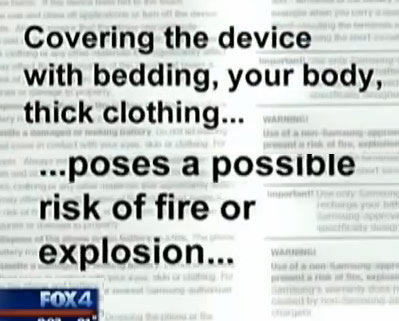 “If anything, they should put a big warning on it, like a cigarette label, if that’s the case,” Thomas told KDFW.

The teenager was quoted saying, “I didn’t think much of it, so I went back to sleep and then I woke up again and it was more prominent”.

A warning can also be found inside the phone’s manual which states covering the device with bedding or other material could restrict airflow and cause a fire:

“Covering the device with bedding, your body, thick clothing or any other materials that significantly affect air flow may affect the performance of the phone and poses a possible risk of fire or explosion, which could lead to serious bodily injuries or damage to property.”

Top reasons for not sleeping with your cell phone:

#1 Hmmmm. How About Your Pillow Exploding Into Flames

A Texas teen recently woke up to a burning smell. The cause? Her Samsung Galaxy S4, which was under her pillow, had partially melted and it scorched her sheets and mattress, too. It is very important to know the users manual also notes that there’s a risk of a fire if the gadget is covered by bedding or other thick material. Bottom line: Don’t sleep with your cell phone on your bed.

.#2 Studies prove you don’t get a good nights sleep

Cell phones (and tablets, TVs, and other gadgets with LED screens) give off what’s known as blue light—a type that studies suggest can inhibit the production of the sleep-inducing hormone melatonin and disrupt our circadian rhythms. This may be because blue light emits wavelengths similar to daylight, which can make our bodies think it’s daytime, at any time. To fall asleep when you want (and need) to, power down all electronics two hours before bedtime. Better yet, keep your phone and laptop in another room while you slumber.

The World Health Organization has warned in 2011 that exposure to cell phone radiation may be possibly carcinogenic to humans, especially in children, whose scalps and skulls are thinner than adults’, and more vulnerable to radiation. So if you’re at all worried about the possible cancer risk, try to text instead of call, hold the phone away from your ear using speakerphone, or use an air-tube earpiece as much as possible—and definitely don’t sleep with the phone next to your head or body.

Raising Standards and Changing the Rules on Cell Phone Radiation

Can Blue Light from LED’s Cause Prostate and Breast Cancer?

The Wireless Industry and Media are War-Gaming 5G Critics