Australia’s largest telco texted its customers about 5.30pm on July 3rd 2014 with a “reminder msg” recommending they visit the Telstra website for information on “electromagnetic energy and tips to reduce exposure”.

“We want all our customers to have up-to-date and relevant information about using mobile phones. This includes offering information on all matters of mobile phone safety.” 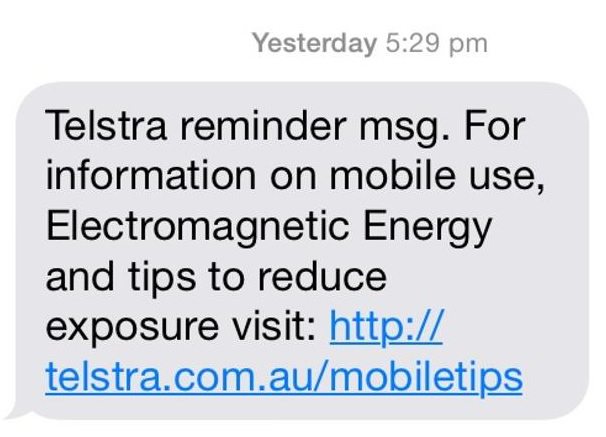 1. Use hands-free devices to keep mobile phones away from the head and body during phone calls

2. Limit the number and length of calls

3. Use the phone in areas of good reception to reduce exposure as the phone will transmit at reduced power.

Some customers took to Facebook to express their alarm over the message and discuss fears about links between mobile phone use and brain cancer.

The SMS encourages customers to head to the Telstra website, where the telecommunications giant has shared information from various health organizations about the potential dangers of heavy mobile phone use.

“Recently the International Agency for Research on Cancer (IARC), an agency of the World Health Organization (WHO), conducted a review on radio frequency electromagnetic energy, which included mobile phones and base stations, and its potential association with cancer in humans,” the site says.

Following a recent study into mobile phones and cancer, the IARC has concluded that although much evidence is “inadequate”, they found a 40% higher risk of tumors in a working group of people who had been heavy mobile phone users.

Why has Telstra taken such a proactive approach to inform millions of their customers on cell phone radiation dangers?  It boils down to the cost involved to insure against health effects!

Telstra acknowledged the insurance issue in the risks section of its annual report, which was released to the public. The company said “while to date we have been able to obtain limited insurance against these risks, the preparedness of insurers to give this type of insurance cover is reducing and even this limited insurance cover may not continue to be economically viable.

“There is actually a risk therefore that an actual or perceived health risk associated with mobile telecommunications equipment could:

Telstra said in a section of the report dealing with information on the company’s operations that it based its position on electromagnetic energy on advice from authorities such as the Australian Radiation Protection and Nuclear Safety Agency and the World Health Organization.

Telstra staff complaining of illnesses when using mobile phones had their appointments with a neurologist cancelled by company lawyers – despite Telstra’s chief medical officer requesting the examinations.

Within weeks of referring four staff to the neurologist, and having grown increasingly concerned about a potential link between mobile phones and health, Bruce Hocking, Telstra’s chief medical officer for 18 years, was told his job had been abolished because his activities “were not relevant to core business”.

After learning that company lawyers had cancelled the appointments without consulting him in early 1995, Dr Hocking protested to Telstra’s legal department, saying he sensed “a strong conflict of interest in these matters between our duties to the shareholder, the employees and our customers. I believe this is an appropriate matter to refer to the Telstra ethics committee”.

Dr Hocking’s claims have been made in a submission to a Senate committee now inquiring into the effects of electromagnetic radiation, and are detailed today in a special investigation in Good Weekend into the growing debate over mobile phones and health.

The investigation has found that:

The Senate inquiry chairwoman, Democrat Senator Lyn Allison, has claimed there was a “distinct pattern emerging of funding not being made available to those doing certain research”. Her allegation comes two weeks after the National Health and Medical Research Council denied more funding to an Adelaide-based scientist, who believed a preliminary study into the effects of mobile phone radiation on mice might have implications for the development of cancers.

A Telstra spokeswoman said the staff appointments with the neurologist had been cancelled because normal company occupational and health procedures had not been followed.

She said Dr Hocking’s job had been abolished because of a decision to outsource his work to the private sector, and not because of his work into mobile phones and any potential health effects.

But Dr Hocking has criticised Telstra’s response, saying he considered it “irrational to claim the appointments I made in early January, 1995, were cancelled because of failure to follow an `endorsed strategy’ since such a process did not then exist and was only being drafted in March”.

The four staff at Telstra had complained of headaches and dizziness when using their mobiles.

Since leaving Telstra, Dr Hocking, a specialist in occupational medicine, has conducted several studies into the health effects of mobile phone radiation.

He has told the Senate committee that recent research he and a clinical neurophysiologist conducted into the case of a man suffering headaches on the same side of his head where he held his phone had, for the first time, uncovered “a clear demonstration of a health effect in humans attributable to a mobile phone … there is considerable likelihood that mobile phones, at the low levels of radio frequency which they operate on, are causing disturbances of neural functions”