RF Safe has been selling air-tube headsets to consumers, governments and corporations around the world for over 15 years as the most hailed way to reduce RF radiation exposure to the brain from wireless devices.

This solved one problem exposing the brain but often created another when increasing exposure to the body.  Just where the phone is held or carried on a persons’ body now becomes a great concern when the phone is used as a hands-free device or when stored closer to the body then suggested in a phone owners manual.

John Coates, RF Safe Founder claims “most consumers are not aware that they need to keep the phone at-least 5/8 inch away from their body – it is hidden in the small print where little attention is given over new smartphone bells and whistles”

Coates’ concerns over consumers being unaware of the potential hazards of unsafe levels of cell phone radiation exposure are starting to be shared by State and Federal Government Committees across America.

State Senator Josh Green, chair of the Hawaii Senate Health Committee, hopes that Senate Bill 2571 SD1 is passed so that warning labels on cell phones will help people think more about electromagnetic radiation and change their cell phone habits, according to reports.

Green worries that manuals alone will go unread. “If you don’t have a sticker that this is a potential health hazard then no one will ever know,” he said.

San Francisco, CA was the first city in the U.S. to require cell phone makers to publicly display how much radiation their products emit.  Originally passed in June 2010, the “Right to Know Ordinance” was the first of its kind in the country. 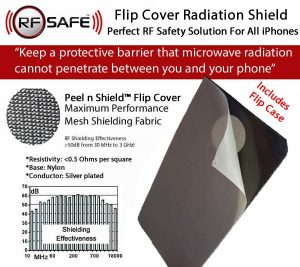 RF Safe’s Peel n Shield™ gives consumers something much better than a warning.  John Coates says “with the health threats of excessive microwave radiation exposure becoming more known to the general public, in our new wireless age Peel n Shield™ is going to be as common in a household as scotch tape is today”

Peel n Shield™ is RF Safe’s newest innovation that allows consumers to make effective cell phone and wireless radiation shields in minutes with only a pair of scissors.

The idea is simple, most materials are transparent to microwave radiation from cell phones and the energy is absorbed into a users body closest to where the cell phone is being carried or stored.

This radiant energy is absorbed much faster than at your head because tissues and organs such as liver, kidneys and reproductive organs provide much better conductivity than the skull.  Simply put most of your major organs have no bone protection like your brain does.

“Peel n Shield™ is the solution to giving cell phone users the radiation protection they need when carrying a wireless device in close proximity to the body for extended periods of time.” said Coates.

RF Safe Peel n Shield™ is made from 2 mm thick soft foam and silver plated microwave shielding fabric that is applied permanently with just pressure to fabrics, metal, even wood or glass. It’s the perfect material sold in very pliable sheets for custom shielding cell phone cases, pockets, holsters, purses, handbags or anywhere else there is a concern over RF Radiation exposure.

John Coates said, “Do-It-Yourself cell phone radiation protection just got really easy. Anyone can do it! All it takes is a pair of scissors to cut the Peel n Shield™ to the desired size. Simply remove the wax-paper and apply with pressure to line the inner part of a handbag or backpack as a protective barrier that deflects radiation.”