Come to find out the home button isn’t the only thing missing in the box of Apple’s 2018 iPhone lineup.

You won’t find the 3.5mm headset adapter in the box anymore either! So why did Apple stick us with a Lightning only option out of the box? Because it’s a proprietary plug design, so third-party manufacturers must pay Apple for the license to use it.

The only one laughing about missing a 3.5mm-to-Lightning adapter in the box is Apple – All the way to the bank!

Apple is trying very hard to suck every dollar out of iPhone users so that they can to retain their throne as the most valuable public company in the world.  A pointless attempt as Amazon will still permanently dethrone Apple while selling headset adapters for as little as .99 cents for other popular phones.

If you think Apple removing the headset jack in 2016 was innovation, you thought wrong!  It was profit! 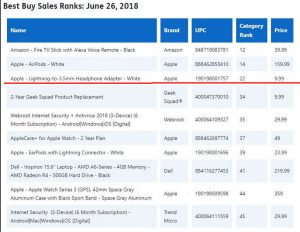 According to statistics from Thinknum, the Apple 3.5mm adapter – which sells for $9.99 – is the third-best-selling item at Best Buy! According to the figures, the adapter has been a best-seller since the 3.5mm port was removed in 2016, however until this year the adapter was always included in the box of a new iPhone.

The cost of materials in a lighting plug amounts to pennies; most accessory companies could easily wholesale them under a dollar. The largest company in the world didn’t get that way being generous. If you want to use any Smartphone accessory that uses a 3.5mm jack, you will now have to pay Apple or an authorized dealer 9.99 USD to use your favorite 3.5mm headset or accessory.

Why SHOULD you be upset?  Its an issue of profits before people’s health and well-being!

A blatant attack on the consumers and their children that made Apple a trillion dollar company!

The researchers tested the radiation directly near the phone and also at several distances away from the phone up to 18 inches (48 cm).  There is a common misperception is that wired Smartphone headsets help to accommodate this safer distance.   There is a major two-fold problem with this assumption.

Distance from the source of radiation inside a Smartphone is your biggest friend! However, channeling microwave radiation with an Apple wired headset using copper wire all the way to your ear is not providing any safe distance at all, and depending on the phone’s location radiation exposure can be much more intense.

Precautionary use of cell phones such as speakerphone and maintaining a distance between the phone and the body could lessen a user’s radiofrequency EMF exposure by a factor of up to 10,000. 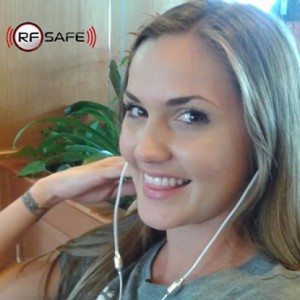 RF Safe headsets provide true distance that reduces radiation exposure by replacing the copper wire typiclly going into the ears of iPhone users with 7 inches of air tube at each ear.  They eliminate the copper wire going into your ear so it doesn’t act as an antenna for microwaves in your ear.  RF Safe headsets work like a doctor’s stethoscope, only an air tube is used to conduct sound to the earpiece.

RF Safe headsets are an excellent, high quality-sounding product that delivers fantastic sound quality while eliminating the harmful radiation from reaching your brain. RF Safe Headsets allow you to enjoy listening to music without electric components inside the ears – for completely safe radiation free sound only acoustic technology can deliver – only available with a 3.5mm plug!

Ok, so everyone buying a new iPhone in 2018 will need to buy an adaptor to use an anti-radiation air-tube headset.

Apple’s founder Steve Jobs wanted no part of informing iPhone users of radiation exposure, something he made clear in an email before his passing of cancer.

Year after year iPhones push the maximum radiation levels allowed by the FCC to be sold in the USA.   In fact the SAR for simultaneous transmission (Cellular, Wi-Fi and Bluetooth) for Apple’s 2018 iPhone XR is 1.59 W/kg – That is just one-tenth of a watt under the maximum legal limit!  If consumers want to increase the distance from the iPhone XR radiation while in a private call or to listen to media, an RF Safe headset is the best option, and you’ll need to buy Apple’s $9.99 adapter to use it.