Dr. Oz says holding a cell phone in your bra can cause breast cancer

[12/6/2013 10:27:56 PM] John Coates: Dr. Oz, Thank you for covering the topic of cell phones and breast cancer on your show today. However, when reading several syndication’s about your show – many media outlets are suggesting that using a wired hands free headset as a good way to reduce the potential hazards.

NOTHING COULD BE FURTHER FROM THE TRUTH!

Phones operate at higher power levels and emit more microwave radiation when they are held lower than the head.

Radiation travels through the wire connecting the phone and earpiece and penetrates the head directly through the ear canal. This has been proven to increase radiation exposure to the brain by 300%.

With phones attached to a belt, microwave radiation penetrates the area by the phone and is absorbed faster than the head because tissues and organs such as the liver, kidneys and reproductive organs provide better conductivity than the skull and have no bone protection.

On the Dec. 6 episode of the Dr. Oz Show (“Why You Should Keep Your Cell Phone Out of Your Bra”), Dr. Oz discussed the link between cell phones and cancer.

Dr. Oz says women who keep their cell phones in their bras are putting themselves at risk for breast cancer. 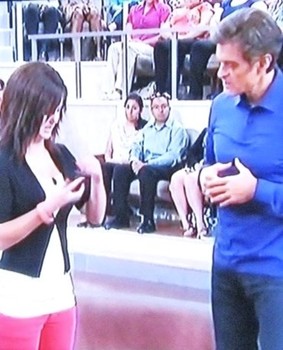 Tiffany Frantz kept her cell phone in her bra for 4 years and got cancer.

“When it comes to cell phones, the bra has become the new purse,” said Dr. Oz, who said millions of women are unknowingly endangering themselves for the sake of convenience.

Dr. Oz’s guest was Tiffany Frantz, a 23-year-old Pennsylvania woman who was diagnosed with breast cancer in 2011.

Frantz and her mom Traci were shocked because Tiffany was healthy, just 21 years old at the time, and had no family history of cancer. But Tiffany revealed that she had carried her cell phone in her bra all day, every day, for four years.

Frantz developed cancerous tumors in the exact same area of her breast, on the same side, where her cell phone rested hour after hour, day after day, for years. Frantz told Dr. Oz she and her doctors were puzzled by her cancer, so she underwent genetic testing, which came back negative (meaning she was not predisposed to cancer).

In March 2012, Tiffany got surgery to get her left breast removed, and underwent radiation treatment. Unfortunately, her ordeal wasn’t over. In February 2013, doctors told Frantz her breast cancer had spread to her hip, and cancerous lesions had developed on her spine, pelvic bone, ribs and skull. She underwent radiation treatment again, and now takes cancer drugs and gets an intravenous bone-building treatment.

Tiffany’s oncologist has never publicly stated that Frantz developed breast cancer because she stored her cell phone in her bra, but a small group of other young women have reported similar breast-cancer patterns. And Tiffany and her mom are convinced that her cell phone did, in fact, cause her cancer.