The Honorable Judge  Frederick H. Weisberg ruled that experts testifying against the wireless industry met the Dyas/Frye legal standards and can offer testimony related to injury causation and health effects from cell phone radiation. The court held evidentiary hearings in December 2013 and January 2014 and reviewed hundreds of exhibits.

Jeffrey B. Morganroth of Morganroth and Morganroth PLLC said “We now have opinions and testimony from prominent scientific experts that will be admissible and support our clients’ claims that cell phone radiation can cause brain tumors in humans. With this landmark ruling the cases are moving forward to fact discovery.”

Or continue to sing along……… 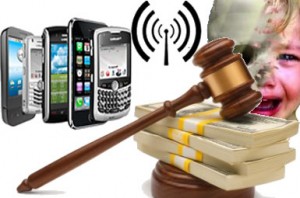 Is It The Same Old Song?
Big Industries Just Play It Again & Again!

If you think you’ve heard the below song & dance before, your right! Just replace the bold words below with Asbestos, DDT, Dioxin , Phen-Fen or Tobacco just to name just a few of the times this Song & Dance made the spotlight!

OK, it does hurt your health but it doesn’t cause cancer.

OK, Cell Phone Radiation can cause cancer but not from Cell Phones rated by SAR .

OK,  Cell Phones rated by SAR can cause cancer, but not the kind this person got.

OK, Cell Phone Radiation can cause cancer, but not at the doses to which this person was exposed.

OK, Cell Phone Radiation does cause cancer, and at this dosage, but this person got cancer/disease from something else, like smoking or power lines he lived near.

OK, he was exposed to Cell Phone Radiation and it did cause his cancer, but we did not know about the danger when we exposed him.

OK, we knew about the danger when we exposed him, but the statute of limitations has run out.

OK, the statue of limitations hasn’t run out, but if we’re guilty we’ll go out of business and everyone will be worse off.

OK, we’ll agree to go out of business, but only if you let us keep part of our company intact, and only if you limit our liability for the harms we have caused.