Why Would Ants Keep Safe Circular Distance From iPhone? Yet You Don’t? 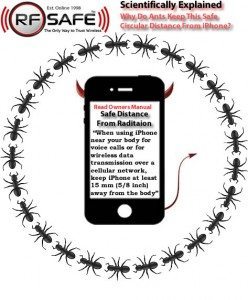 To cut to the chase, the viral video was faked. However, it can’t change the fact that cell phone radiation does change an ants movement and behavior patterns.  To the point it nearly parallelizes ants caught directly under the highest intensity of a GSM phone. Take special note that ants which could escape away from the source of radiation under them, did, while others because of total disorientation could not escape.

So if you’re one of the millions out there that have seen the computer generated ant images and video editing showing a video of ants circling an Apple IPhone.

The success of viral videos like this always have a hint of truth….. If you’re looking for that shocking hint of truth why ants DO avoid RF radiation from GSM phones and even cordless phone radiation. Watch the video and continue reading…..

So if you’re one of the millions out there that have seen the computer generated ant images and video editing showing a video of ants circling an Apple IPhone. The success of videos like this always have a hint of truth….. If you’re looking for that shocking hint of truth why ants DO avoid RF radiation from GSM phones and even cordless phone radiation. Continue reading…..

You’re probably wondering like the rest of the world why it’s happening. What’s the hint of truth behind this faked video?

Well as the Dutch scientist featured in this video from Brainport Biotech Solutions would tell you it’s electromagnetic radiation.

Watch these clips from a recent study proving ants instinctively already have the 411 on cell radiation hazards along with the need to keep their safe distance from the source.

Laws in some cities in the USA mandate they warn cellphone customers of radiation absorption levels from wireless devices already. Berkley CA is currently enforcing such an ordinance so citizens understand the safe operating distance from their new smartphones.

Now why haven’t you been keeping a safe distance from your smartphone? Well, it’s probably because you haven’t read the instruction manual that goes on for days about how to use your phone and very little about SAR Levels and radiation hazards in very small print can be found.

By safe, I mean by the FCC guidelines that make it legal for cell phone companies to sell you this pocket microwave to begin with!

In one of the owner’s manual for an iPhone I’ve seen they advise you to keep the cell phone 15mm away from the body 5/8 of an inch – Who holds their phone that far away from their body let alone head?

Personally I feel like I’m always shoving mine all up in my ear trying to hear better! Maybe if we all had ants circling our new iPhone’s we would be more inclined to keep a safe distance from harmful RF radiation emissions.

Luckily for the REAL ants, their fancy little antennas are causing them to suffer in pain from the radiation transmission. Therefore this explains why ants try to escape hazardous radiation exposure.

It doesn’t matter if the video of ants circling iPhone is real or fake, because it’s clear in this STUDY that there is harmful radiation coming from your cell phones that does effect ants. Maybe we should be more worried about it than just laughing off a gag video and realize ALL the facts behind RF radiation exposure.

If your children loved the movie “its a bugs life”, this could be another classic example where a computer generated bug is better informed than most people by keeping a safe distance from cell phone radiation.