Could your smartphone or tablet give you SKIN CANCER?

The blue light emitted from your TV, computer and phone is called high-energy visible light (HEV) and is as dangerous, if not more, than sun damage.   Co-author of the study, Mary Logue of the University of New Mexico, said: ‘These devices are generally used for communication or entertainment, so it can be easy to overlook their reflective properties unless you happen to catch the glare off a screen.’

Research on the specific effects of HEV is still developing, but scientists have said the light penetrates skin more deeply than the sun’s UV rays.

The study suggests the light may significantly affect skin and stop it from healing – and its impact on DNA leads experts to believe it could accelerate the ageing process.

Prematurely-aged skin is a known side effect of sun damage, but these new findings could suggest just as much damage is being done at our office desks and inside our homes.

Mobile phones, tablets and laptops could trigger skin cancer by reflecting the sun’s harmful UV rays, scientists have warned.
The findings of a new study have prompted researchers to advise people wear sun cream, sunglasses and even to cover their faces and necks if using their phones outside.

While tests were on mannequins rather than people, experts said the research raises an important practical point.

A study by scientists at the University of New Mexico has warned that people may be putting themselves at risk of skin cancer by using their smartphones, tablets and laptops outside. They suggest the UV rays reflecting off the devices, could trigger the disease

The researchers were compelled to investigate the issue after noting the similarities between the devices and old-fashioned tanning reflectors, Dr Logue told Reuters Health.

Her team set up a mannequin head wearing a UVA/B light metre and faced it towards a standard musician’s sheet music stand.

They then placed various mobile devices on the stand

In two trials, the researchers recorded UV readings for an hour of exposure, from 11am to noon.

They used a magazine, an iPhone5, various iPad models, two Macbook laptops and a Kindle e-reader.

In the first experiment all the devices were positioned 16.5 inches from the UV sensor.

For the second, they were secured 12.25 inches away.
Researchers angled the devices and the UV sensor to mimic an adult looking down at the device.

The study team measured UVA/B dose exposure from light reflected by the devices in joules per square centimetre, over one hour and compared that to the UV readings with an empty sheet stand.

In the first experiment, when the devices were further away from the mannequin, an open magazine increased UV dosage exposure by 46 per cent, compared with the music stand alone.

Researchers note it was only in the second trial, where devices were ‘held’ closer to the mannequin’s ‘face’ that the iPhone5 was used, and was found to increase exposure by 36 per cent.

Dr Logue said: ‘The harmful effects of UVA and UVB rays have been well documented, and limiting exposure is the single most effective preventative measure an individual can take. 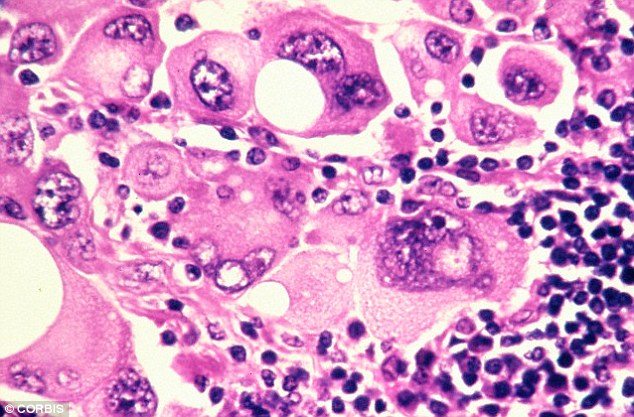 Though the experiments were performed on a mannequin, experts have warned the study has raised a practical point. They say in real world use, the fact the sun reflecting light off the screens makes it hard to read them, may help encourage people to use them in the shade, and thus reduce the skin cancer (pictured) risk
‘Significant levels of UV exposure, such as those found in this study, increase cumulative lifetime UV dosage.’

She said given the increase in UV exposure, more research must be conducted to see if skin cancer risk is affected.

‘While the best course of action is to limit smart device usage to the indoors, this is obviously impractical for most people,’ Dr Logue advised.

‘We recommend covering the shoulders, wearing sunglasses and wearing sunscreen, especially on the exposed areas of the neck and face.’

She suggested the devices themselves could be redesigned to be less reflective, or to include UV sensor technology so users can track their exposure.

Dr Robert Dellavalle, chief of the Dermatology Service at the Denver VA Medical Center, who was not part of the new study, said that while the research did not involve real people using the devices, it raised a practical point.

In real world use, it may be hard to see phone or tablet screens in full sun, and using them may actually encourage shade-seeking behaviour, he added.

The study is reported in the Journal of the American Academy of Dermatology.