In late March, the NTP convened two peer review panels, one to assess the technology used in the study, and one to make recommendations on its findings. The first panel found that the “reverberation chamber technology was adequate” for simulating the effects of cellphone RFR exposure in rats and mice. The second panel voted to accept the “conclusions as written” in the study of RFR exposure on mice, which found “equivocal evidence of carcinogenic activity” from exposure to both Global System for Mobile Communications- (GSM) and Code Division Multiple Access-modulated RFR.

However, in their review of the study on rats, the panel voted to recommend increasing the NTP’s evidence level to “clear evidence” of carcinogenic activity in the male heart, and “some evidence” in the male adrenal gland (GSM only) and brain (gliomas). They also increased the evidence rating regarding the female heart. You can see how they voted on each recommendation and watch the panel discussions, which were recorded live.

This study was one of the most expensive and technically complex of its kind. By itself, the panel’s finding of clear evidence that cellphone RFR causes cancer in rats should have been a major story in the press. From a journalistic perspective, this should have been even more of a headline, given that in the same week that the panel publicized its recommendations, another scientific study published by the Ramazzini Institute in Italy replicated the NTP’s findings on rats, raising the confidence level in the study’s evidence. The director of research at the Ramazzini Institute suggested it was time for IARC to “consider changing the RF radiation designation to a ‘probable’ human carcinogen.” 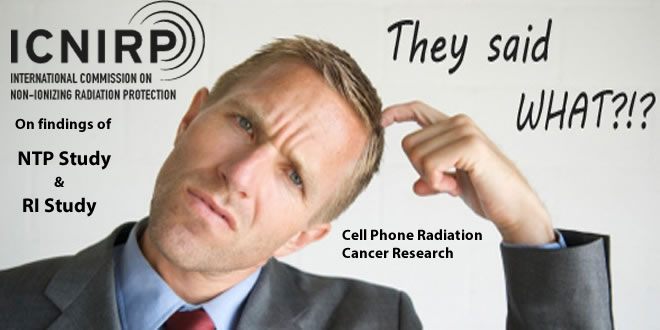 Health Risk Downplayed By “International Commission for the Protection from Non-Ionizing Radiation” ( ICNIRP ).  Scientist rebut by pointing out the obvious!

In recent days, the International Commission for the Protection from Non-Ionizing Radiation ( ICNIRP ) has defined the results of the studies conducted by the Ramazzini Institute and the National Toxicology Program (NTP) on the waves of mobile telephony “unconvincing” .

Below are the observations of Dr. Fiorella Belpoggi, director of the “Cesare Maltoni” cancer research center of the Ramazzini Institute.

A few days ago the International Commission on Non-Ionizing Radiation Protection ( ICNIRP ) insinuated that the two recent animal studies pointing to cancer from cell phone radiation are not convincing and should be used to revise current exposure standards.

Comments by Dr. Fiorella Belpoggi, Director of CRC, Cesare Malton on the ICNIRP evaluation of the NTP and Ramazzini Institute studies: