It’s easy to see the bell’s and whistles of the new S7, but what about what you can’t see — RFR Radiation Levels!

The Galaxy S7 has a higher SAR than the iPhone 6s and 6s plus.

Many older Samsung Galaxy Smartphones still uphold some of the lowest Smartphone SAR levels in the industry. However, this year’s Galaxy S7 has a Simultaneous Transmission SAR level of 1.59 W/kg (measured in watts per kilogram) for Samsung’s Galaxy S7 FCC ID A3LSMG930F.

The S7 is very close to the FCC’s legal limit of 1.60 W/kg, averaged over 1 gram of stimulated human tissue

If the s7 was a result of listening to the people as JK Shin, President/CEO of Samsung Electronics for Mobile Consumer Products claims… Well, Samsung’s CEO would have heard about the public and public officials demanding SAR (Radiation Level) warnings which are being mandated in city and countries around the world.

Several examples of the public outcry for lower radiation phones and health effects research are in this video — Yet Samsung has built their highest SAR level cell phone to date when making the Galaxy S7.

Completely reversing the lowest SAR trend they had been on for years. It wasn’t the people they were listening to — it was Facebook and the adoption of VR gear they listened to equaling profits before the public’s health!

See this video on testing the new VR gear https://www.youtube.com/watch?v=WJV_0Crgu6Q …only inches from the eyes of young children for hours at a time — besides the fact no government has done any testing on the phone absorption levels for children with the phone held directly in front of the eyes — NONE!

RF Safe is making sure the public is aware of the risk involved when using wireless devices and they are taking an extra step in doing so.

Inside each RF Safe case, a cell phone user will find Berkeley’s radiation exposure warning that passed the approval of court hearings in California.

The warning in each flip case also includes the original text declaring that cell phone radiation exposure carries a potentially greater risk for children, which was unanimously passed by all city council members on May 12, 2015.

The warning text that RF Safe includes inside each cell phone case is as follows:

“USA Court Approved Mandatory Warning on Smartphone Radiation Exposure. If you carry or use your phone in a pants or shirt pocket or tucked into a bra when the phone is ON and connected to a wireless network, you may exceed the federal guideline for exposure to RF radiation.”

“This potential risk is greater for children” was removed from the original warning because of opposition trade groups positioned by the wireless industry. 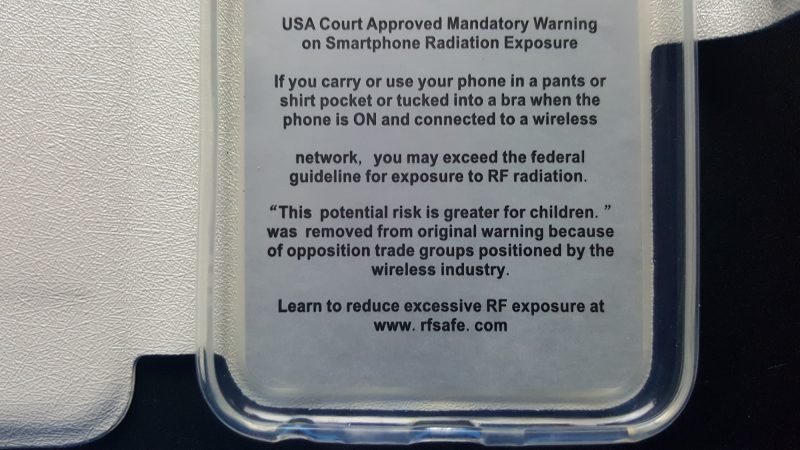 These 2nd generation RF Safe cell phone radiation shielded cases with the above warning label are available now in 4 colors:

According to the company’s CEO, additional RF Safe Galaxy S7 case colors are expected to be available on August 1, 2016

RF Safe’s S7 case is easy to test yourself with most RF meters when using 2G and 3G cellular networks.

As an extra safety precaution, RF Safe also suggests using an air-tube headset over the wired headset that comes with the phone to further reduce RF exposure from headset wires, this can be purchased in a 4 pc RF safety package for only 69.99, including free shipping world-wide!

USA SAR Level Legal Limit is 1.6 W/kg – FCC SAR testing is measured in watts per kilogram (or W/kg) averaged over ONE gram of simulated biological tissue. It is a well known FACT SAR testing was not designed for protecting women or children from harmful radiation exposure, and SAR Test do not take into consideration health effects below thermal levels