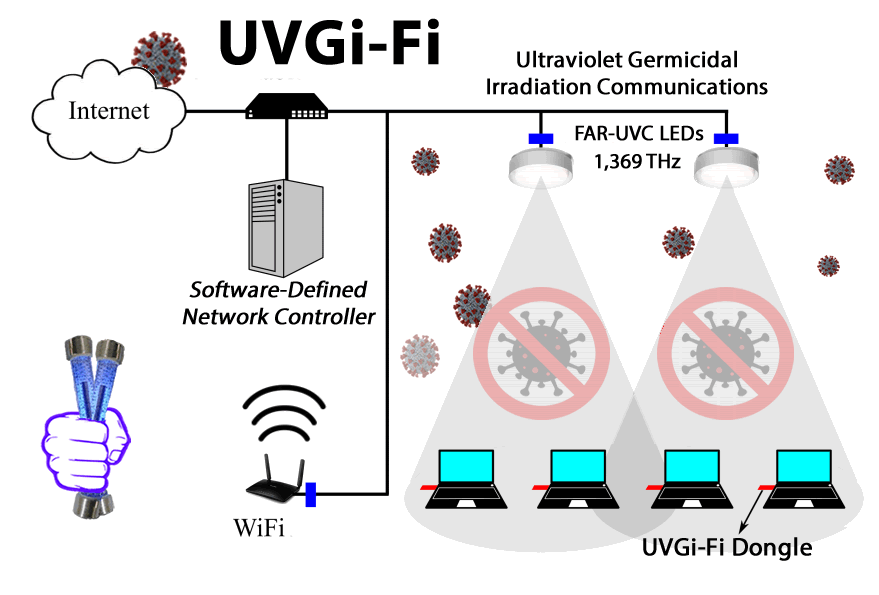 By RF SafeCategories: Cell Phone RadiationComments Off on RF Safe’s place in the Far-UVC space

This is absolutely one of the world’s most important discoveries to fall within human health and environmental effects of human-made electromagnetic radiation. The discovery was made using 222nm electromagnetic waves with powerfully energized 5.58 eV photons.

Far UVC is something most people have never heard of, and I sincerely hope you share this information with as many people as you can so that this frequency becomes common knowledge sooner than later!

It is a tiny section of the electromagnetic spectrum under the classification of Ultraviolet within the UV-C band.

Most everyone is familiar with the common bands of Ultraviolet UVA and UVB that reach the earth’s surface responsible for suntans, important vitamin production, and even dreaded skin cancer.

An awakening for technology bigger than that of Edison’s light bulb starting the electric and electronic age recently came using band-pass filters and KrCl lamps to examine a small spectrum of EMR studied for human safety.

Today using special Far-UVC light bulbs, we can create a very narrow band of electromagnetic waves with a peak frequency of around 1,350THz in the elusive Far Ultraviolet-C spectrum.

Light bulbs aren’t the only source anymore, and that is a huge game-changer! Far-UVC gets very exciting going fully solid-state, commercially available Far-UVC LED emitters at 219nm or approximately 1,369 THz are coming in late 2021.

Over the last eon of earth’s history, with the exceptions of climactic events that have affected the upper atmosphere, photons at this Far-UVC frequency have been 100% blocked by the ozone layer. Still, the grand scale of these select EMR frequencies’ potential for humanity has only recently come to light!

It was two years prior to the pandemic that I personally became acquainted with the importance and amazing power of a 23-nanometer section of the electromagnetic spectrum between 207-230nm wavelengths or 1,448.3 THz and 1,303.5 THz with a corresponding photon energy of between 5.99 eV and 5.39 eV — oddly enough, from an incident that happened hours after my second daughters birth. Many long-time visitors are aware that RF Safe was started in 1998 after losing my first child. I have been actively involved in researching and manufacturing the best EMR safety solutions for over 20 years.

One could say my second daughter’s birth, Melanie Coates brought the meaning of Angel Leigh Coates’ life full circle the day she was born, leading me to a safe electromagnetic frequency! See the incident yourself. I’ve included a video showing a sewer line breaking in the hospital room above us, causing nasty sewage water to collapse ceiling tiles. Of course, a few radiation and virus searches were in line with my background of understanding photonic interaction with the matter when I saw the light.

Just as Tesla was drawn to Edison’s light bulbs, I too was drawn to a new light bulb introduced on a Ted Talk YouTube video on Dec 14. 2017, a few days after my daughter’s birth by Dr. David Brenner, who was starting to make this newly mass-producible frequency of electromagnetic radiation famous for an amazing discovery.

That amazing discovery was a frequency of electromagnetic radiation studied to be safe for human exposure, yet more effective than legacy UVGI (Ultraviolet germicidal irradiation) at inactivating potential superbugs with Far-UVC light. Please watch the Ted Talk for a great introduction to FAR-UVC light.

Given the situation you witnessed in the video above where I was surrounded by nurses that didn’t know how to respond to a bio-hazard – I wished the hospital we were in had Far-UVC lighting!

Having spent my entire life researching and designing technology to mitigate negative health effects from wireless radiation. I didn’t see a Far-UVC light bulb; I saw a frequency just as Tesla didn’t only see the light from a bulb. Tesla’s vision saw the frequency of electromagnetic energy as a utility in remote control, wireless data, energy transmission, and electromagnetic energy beam weapons. Tesla understood a much grander use for electromagnetism than creating shadows in the dark.

The reality is that today we are in a similar position as we were in 1884 when Tesla took the Job to help Thomas Edison’s quest for DC electricity after creating the DC-powered light bulb emitting the first reliable source of electromagnetic radiation for visible light frequencies.

However, the landscape is starting to change with solid-state Far-UVC LED emitters allowing for modulated Far-UVC frequencies capable of extremely beneficial utility for the IoT to play the most important role in pandemic prevention.

How could this be?

How could the Internet of Things on a different electromagnetic frequency prevent pandemics of this nature and WIN the War On Flu?

The answer comes in the form of truly human-safe wireless device communications.

Zero SAR shortwave Far-UVC UVGi-Fi technology added to phones, TVs, toasters, or anything else that needs to be connected indoors to a wireless network with speed up to 200 times faster than our current Wi-Fi.

The use of filtered far-UVC presented in the above Ted Talk is referred to as light. However, Far-UVC is one hundred percent invisible to the human eyes. So calling it light might cause it to be mistaken for the harmful UV rays that accompany sunlight.

The use of these human safe EM frequencies is the most cutting edge electromagnetic energy virus shielding at 222nm from filtered KrCl Excimer bulbs, or Far-UVC LED’s transmitting 1.369 THz can not penetrate the nucleus of living human skin cells or reach cells in the eyes. You can learn more about many current Far-UVC options at www.quantadose.com.

If the ability to produce a very narrow band of Far-UVC radiation had been possible 100 years ago? Tesla would have told reporters he had scaled down his energy beam weapon for targeting only airborne viruses and biological surface contaminants with a new frequency for wireless communications between 1,448.3 THz and 1,303.5 THz — design for indoor spaces with a lot of active personnel inside the wireless disinfection zone — like Tesla’s splendid high-rise home at the New Yorker hotel. Visit UVGi-Fi for a glimpse into the future of safe wireless technology and pandemic prevention rolled up into one!

Our biggest ambition is an upgrade in terahertz frequency wireless technology (7Gnow.com)! Current shortwave Li-Fi (light data transfer) at 372nm, which is only 2.22eV (e volts) away from 222nm, or UVGi-Fi www.uvgi-fi.com

From a technology perspective, we are very close to taming the microscopic world this way.

Those that have been studying EMR health effects for decades can agree that using an EMR frequency at 1,369 THz is the start of wireless communications devices with a zero SAR level – the Holy Grail for human safe wireless radiation with the ability to harness the photons enormous power to sanitize indoor environments!

Electromagnetic radiation from traditional Wi-Fi at 2.4 GHz microwave exposure levels, or 0.0000099 eV, which is 9.9 millionths of an electron volt, are very low energy photons with long wavelengths that can travel deep into human tissues, where Far-UVC at a frequency of 1,350 THz can not penetrate living human cells.

This powerful 222nm photon energy at 5.58eV uses its very high-energy photons to effectively target only nanoscale-sized organic mass with precisely tuned electromagnetic waves for inactivating airborne viruses’ without using an electromagnetic wavelength long enough to penetrate the outermost layer of our dead skin cells or the tear layer of our eyes. To learn more about how you can support UVGi-Fi and add Far-UVC to your pandemic countermeasures, please call 1-800-713-9004