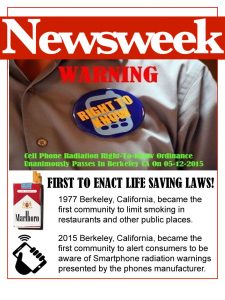 CTIA, formerly the Cellular Telephone Industries Assn., is fighting in federal district court the Berkeley law, the only cell phone radiation warning of its kind in the nation, that requires the following guidance to radiation warnings to be posted in stores selling cellphones:

“If you carry or use your phone in a pants or shirt pocket or tucked into a bra when the phone is ON and connected to a wireless network, you may exceed the federal guidelines for exposure to RF radiation.”

Customers are told to read the safety regulations in the cellphone manuals.

Berkeley has a proven track record of taking action first when large scale health threats impact their township.  After-all in 1977 Berkeley, California, became the first community to limit smoking in restaurants and other public places.  How many lives have been saved by Berkeley’s early adoption of Laws to ensure public safety which eventually all 50 states now enforce? Conservatively millions, if not 10’s of millions of lives – and many feel Berkeley’s cell phone radiation warning will spread to all 50 states and save even more lives!

On 5-12-2015 Berkeley, California, became the first community to alert consumers to be aware of Smartphone radiation warnings presented by the phones manufacturer.  Now how on earth this can be considered a violation of free speech is anyone’s guess, however it would surly have our founding fathers turning over in their graves to see such a misuse of the 1 st constitutional amendment take place by corporations harming people for profit with no remorse.

Newsweek reporter Ronnie Cohen has done an extensive article examining the legal arguments of both sides, “Berkeley, California has become ground zero over health debates on the safety of exposure to radio frequency in cellphones.”    According to RF Safe, if Berkeley can’t successfully enforce their unanimously approved cell phone radiation “Right to Know” without a fight from the wireless industry using an absolutely sick perversion of the 1st Amendment  — How will consumers ever know how much radiation they are being exposed (See video how a poorly trained Sprint store sales person answers a simple question about the level of radiation transmitted from the phone being sold) A written ruling if the Berkeley cell phone law will prevail in higher courts is expected “in the next few months,” said the Newsweek article.

CTIA’s slogan is “Everything Wireless.” Its website notes the industry spent $166 billion on cell towers and networks from 2009-14.  There are currently over 594,000 cell towers in the U.S., many of them in school and residential districts, according to rfsafe.com, which claims they are a major health hazard most notably because it’s been reported by the Wall Street Journal that One in 10 Cell Phone Towers Violate RF Radiation Safety Rules!

Berkeley is using Lawrence Lessig, Harvard law professor and “cyberlaw expert.” He is working pro bono.  He says he is doing so because corporations discourage governments from imposing regulations by filing First Amendment lawsuits that are prohibitively expensive to defend. “I’m a Constitutional scholar and I am very concerned,” he told Newsweek. He says that the warning notice in stores is “nothing but an arrow that points to the very manuals written by manufacturers.”

Lessig says the FCC never made a blanket statement that cellphones are safe in all circumstances, but only when used as tested. “We are relying on a regulation of the FCC. We don’t want to get into an argument about the science.”

A telephone survey by Berkeley found that 70% of voters were not familiar with FCC-mandated safety tests. The safety tests assume that people carry cellphones at a distance from their bodies.  Following the survey, the Berkeley Council passed a law requiring warnings on cellphones. Berkeley is arguing that the warnings are “free speech.” and the information is prudent to public safety as the towns elected officials have advocately spoken out on the peoples behalf.

Note: Below list is not intended to be considered a full comprehensive list of studies as thousands more exist. For additional current research studies, see Joel’s post, “Should Cellphones Have Warning Labels? (Wall Street Journal).”