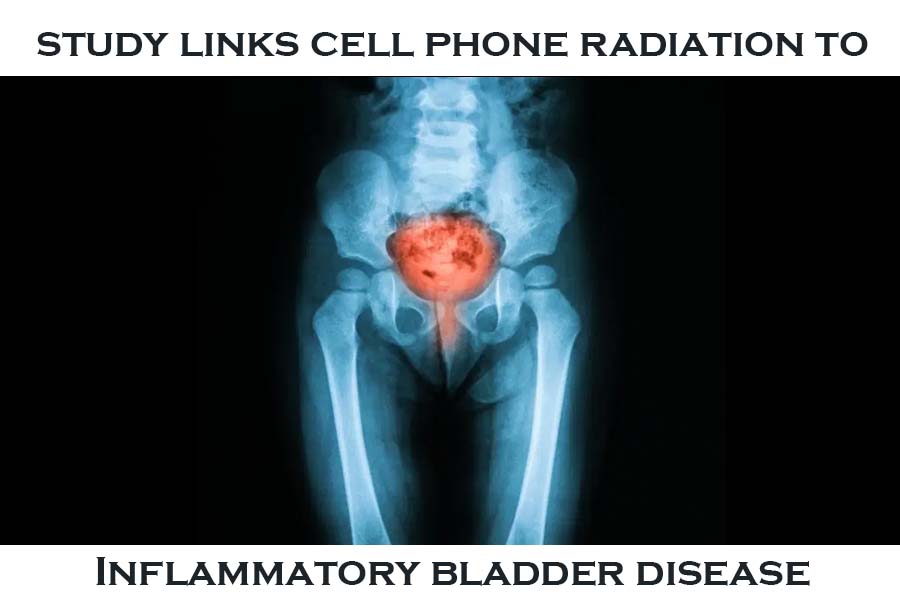 In this video, we’ll be looking at how the use of cell phones is being associated with inflammatory bladder diseases.

It is becoming increasingly evident that cell phone radiation, as well as cell phone use, may be contributing to many human illnesses.

Thanks to a 10-year, 30-million-dollar study by the National Toxicology Program, there is already clear evidence that it causes cancer. Recently, the incidence of nonmalignant bladder diseases such as interstitial cystitis and overactive bladder syndrome has been increasing.

In a report filed on the U.S. National Laboratory of Medicine website, a study was done to explore the relationship between cell phone radiation and inflammatory bladder disease.

Group 1 was exposed to electromagnetic waves for 8 hours per day for 20 days and then their bladders were taken out immediately.

Group 3 was the control group and they were not exposed to electromagnetic waves.

The study concluded that Mast cells, which are one of the immunological cells derived from bone marrow, may have important roles in cause of non-allergic inflammatory bladder, gastrointestinal and skin diseases in laboratory animals. Intensive use of mobile phones has side effects on many organs like the bladder and can cause an increase in both the number and activity of mast cells. This situation may play a role not only in the cause of inflammatory bladder disease, but it also can lead to exacerbating these disorders.

If you would like to examine the report for yourself, I have included a link to it below. Many more informative links are available in the report itself.
Report Link:
https://www.ncbi.nlm.nih.gov/pubmed/25251956
Full-Text Version of the Report:
http://www.scielo.br/scielo.php?script=sci_arttext&pid=S1677-55382014000400520&lng=en&tlng=en