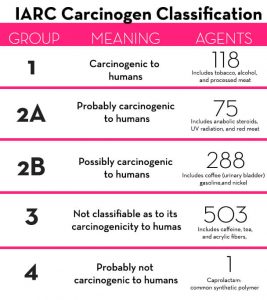 An expert cancer researcher and advisor to the World Health Organization International Agency for Research on Cancer (WHO/IARC) has issued his scientific opinion that radio-frequency (RF) radiation from any source – such as the signals emitted by cell phones, other wireless and cordless and sensor devices, and wireless networks – fully meets criteria to be classified as a “Group 1 carcinogenic to humans” agent, based on scientific evidence associating RF exposure to cancer development and cancer promotion.

“The evidence indicating wireless is carcinogenic has increased and can no longer be ignored,” stated Dr. Anthony B. Miller at a July 31, 2017, lecture in Jackson Hole, Wyoming sponsored by the Environmental Health Trust where international experts presented the best available science on “cell phone and wireless radiation”.

Miller explained that the basis for his opinion includes recent scientific publications which include the 2017 re-analysis of data from the Interphone study, the 2014 French National CERENAT Study, several new publications on Swedish cancer data, and the 2016 results of the National Toxicology Program.

Dr. Anthony B. Miller is a physician epidemiologist who specializes in cancer etiology, prevention, and screening. Miller is Professor Emeritus at the Dalla Lana School of Public Health of the University of Toronto and Senior Medical Advisor to the Environmental Health Trust.

He has been a longtime advisor to the World Health Organization (WHO) and was Senior Epidemiologist for the International Agency for Research on Cancer (IARC).

He served as Director of the Epidemiology Unit of the National Cancer Institute of Canada, Chair of the Department of Preventive Medicine and Biostatistics at the University of Toronto, Head of the Division of Cancer Epidemiology at the German Cancer Research Centre, and Consultant to the Division of Cancer Prevention of the U.S. National Cancer Institute.

He has performed research about electromagnetic fields and cancer and has served on many committees assessing the carcinogenicity of various exposures. Miller was visiting Senior Scientist in the IARC Monographs programme as a reviewer to the scientific literature supporting a designation of Radiofrequency Electromagnetic Fields (RF-EMF) as a Group 2B possible carcinogen in 2011.

Other experts agree that the increased evidence now establishes RF radiation as a human carcinogen. For example, researchers Dr. Lennart Hardell and Michael Carlberg have published several epidemiological studies that found increased brain cancer associated with long-term cell phone use and conclude that “RF radiation should be regarded as a human carcinogen causing glioma.”

In response to skeptics who claim, “There is no evidence,” researchers point to published research that has consistently found increased cancer risk in well-designed case-control studies that have looked at persons who used cell phones for more than ten years.

Environmental Health Trust plans to post all lectures and videos from the July 31, 2017, presentation online.

Watch this excerpt from Dr. Anthony Miller’s lecture on July 31, 2017

“The Dark Side of Cell Phones: The Shocking Truth About Cell Phone Radiation”

“Cell Phone Radiation: A Hidden Danger That Could Harm Your Health”

“Are You Putting Your Health at Risk with Your Cell Phone? Find Out Here”

“Cell Phone Radiation: The Silent Killer in Your Pocket”

“Wake Up Call: The Alarming Effects of Cell Phone Radiation on Your Health”

“Are you aware that #cellphoneradiation is classified as a Group 1 carcinogen by the @WHO? Learn more and take action. #health #cancer #mobilephone”

“Don’t be a victim of #cellphoneradiation. Learn simple steps to reduce your exposure and protect your health. #healthtips #mobilephone #radiation”

“Say goodbye to #cellphoneradiation. Learn how to keep yourself and your family safe from this hidden danger. #healthyliving #mobilephone #radiation”