Using a cellphone for more than half an hour a day over five years can triple the risk of developing certain types of brain cancer.   RF Safe offers the only complete safe cell phone (SCP) system of phone usage in the world!

The findings published on 9 May 2014 in the international peer-reviewed journal of occupational & environmental medicine, titled “Mobile phone use and brain tumours in the CERENAT case-control study”. http://oem.bmj.com/content/early/2014/05/09/oemed-2013-101754.short?g=w_oem_ahead_tab

Researchers found that people who used mobiles for 15 hours per month on average had a two to three times greater risk of developing glioma and meningioma — the main types of brain tumor — compared with those who used their phone rarely.

The comparison found a higher risk among those who used their phone intensively, especially those who used it for their work, such as in the sales industry. The duration of use in this category ranged from between two and 10 years, averaging at five years.

The study conceded “It is difficult to define a level of risk” citing the reason that mobile phone technology is constantly evolving.  This ever evolving technology to push faster data transmission exposes 4G cell phone users to different frequencies of electromagnetic radiation than 3G phones, and microwave exposure from 1st and 2nd generation cell phones transmitted microwave radiation differently than each of its predecessors.

These advancements are likely responsible for new unexplained anomalies in contrast with previous research.  The study found that cancer occurred on the opposite side of the brain to where the phone was habitually used, rather than on the same side.

John Coates, Founder of RF Safe, says this shouldn’t be a surprise to anyone: any RF engineer can explain that there are distinctively very different fields of energy surrounding a smartphones antenna system.  To simplify it we have to understand the difference between near-field and far-field radiation surrounding an antenna to distinguish the most bio-active fields of energy which are most likely to induce a carcinogenic effect.

A very plausible answer as to why cancer caused by exposure to cell phone radiation is proving to be more damaging to tissue 4-7  inches away from the phones antenna can be explained easily.  Furthermore this points out more flaws in using the FCC accepted SAR guidelines to establish safe levels of microwave exposure.

For the sake of understand the different types of radiated fields of energy surrounding a typical smartphone. The radiated frequency from a cell phone antenna using Bluetooth technology is 2.4 GHz, all this really tells you is that the wavelength of the electromagnetic wave is 4.92 inches.  A photon simply cycles 2.4 billion times per second traveling at the speed of light in a vacuum through space-time. 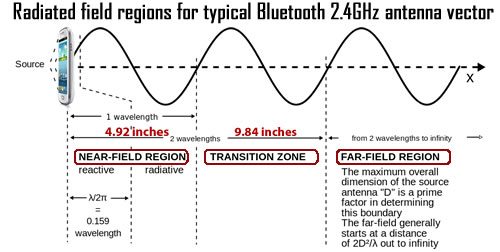 The radiated energy from a typical cell phone goes through 4 transitions of different energy potentials within 10 inches surrounding  a typical 2.4GHz wireless device; each type of exposure is unique with regards to biological effects

Very close to the antenna, in the reactive region, energy of a certain amount, if not absorbed by a receiver, is held back and is stored very near the antenna surface. This energy is carried back and forth from the antenna to the reactive near-field by electromagnetic radiation of the type that slowly changes electrostatic and magnetostatic effects. For example, current flowing in the antenna creates a purely magnetic component in the near-field, which then collapses as the antenna current begins to reverse, causing transfer of the field’s magnetic energy back to electrons in the antenna as the changing magnetic field causes a self-inductive effect on the antenna that generated it. This returns energy to the antenna in a regenerative way, so that it is not lost. A similar process happens as electric charge builds up in one section of the antenna under the pressure of the signal voltage, and causes a local electric field around that section of antenna, due to the antenna’s self-capacitance. When the signal reverses so that charge is allowed to flow away from this region again, the built-up electric field assists in pushing electrons back in the new direction of their flow, as with the discharge of any unipolar capacitor. This again transfers energy back to the antenna current.

Because of this energy storage and return effect, if either of the inductive or electrostatic effects in the reactive near-field transfers any field energy to electrons in a different (nearby) conductor, then this energy is lost to the primary antenna. When this happens, an extra drain is seen on the transmitter, resulting from the reactive near-field energy that is not returned.

The radiative near-field (sometimes called the Fresnel region) does not contain reactive field components from the source antenna, since it is so far from the antenna that back-coupling of the fields becomes out-of-phase with the antenna signal, and thus cannot efficiently store and replace inductive or capacitive energy from antenna currents or charges. The energy in the radiative near-field is thus all radiant energy, although its mixture of magnetic and electric components are still different from the far-field. Further out into the radiative near-field (one half wavelength to 1 wavelength from the source), the E and H field relationship is more predictable, but the E to H relationship is still complex.

The near-field is remarkable for reproducing classical electromagnetic induction and electric charge effects on the EM field, which effects “die-out” with increasing distance from the antenna (with magnetic field strength proportional to the inverse-cube of the distance and electric field strength proportional to inverse-square of distance), far more rapidly than do the classical radiated EM far-field (E and B fields proportional simply to inverse-distance). Typically near-field effects are not important farther away than a few wavelengths of the antenna.

This accounts for the distance between where a user holds a cell phone relative to the tumor locations concluded in the study.

By taking into consideration how an antenna system works gives a great deal on insight into the results of this most recent study and explains why tumors on the other side of the head correlates well with distance for the transition of E and H field coupling at microwave frequencies.

In the far-field, (approximately two wavelengths from the antenna) the relationship between the electric field component E and the magnetic component H is that characteristic of any freely propagating wave, where (in units where c = 1) E and H have equal magnitudes at any point in space.  It’s this type of RF exposure implicated in a Microwave effect which is proven to damage DNA in a two stage process involving oxidative stress.

The carcinogenic effect of radiofrequency electromagnetic fields in humans remains controversial. However, it has been suggested that they could be involved in the aetiology of some types of brain tumours.

Objectives The objective was to analyse the association between mobile phone exposure and primary central nervous system tumours (gliomas and meningiomas) in adults.

Methods CERENAT is a multicenter case-control study carried out in four areas in France in 2004–2006. Data about mobile phone use were collected through a detailed questionnaire delivered in a face-to-face manner. Conditional logistic regression for matched sets was used to estimate adjusted ORs and 95% CIs.